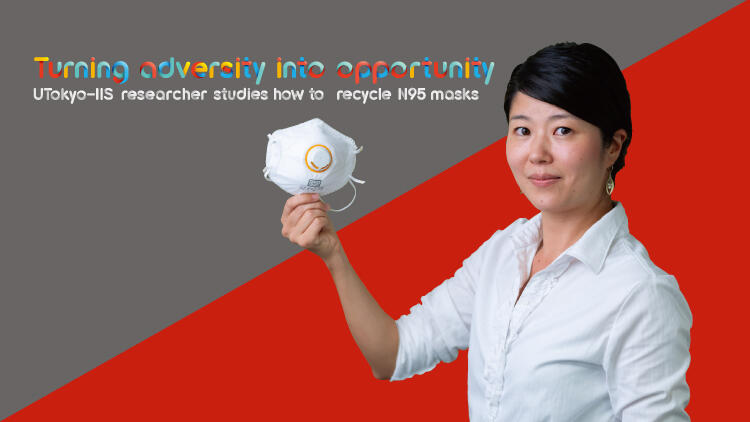 In mid-March 2020, when Kaori Sugihara moved to Japan from Switzerland to join UTokyo-IIS as a researcher, COVID-19 was raging in Europe and creeping into Japan, affecting airline services. Had her departure been even a day later, she might have missed a connecting flight and got stranded before arriving in Tokyo, she says.

Then, after starting in her position as a lecturer of biophysical engineering at the UTokyo-IIS in April, Sugihara found her hands were tied. A range of sophisticated equipment she had arranged to ship from her former lab at the University of Geneva didn't arrive as scheduled, as the pandemic disrupted cargo transport.

But Sugihara says this pause in research gave her time to reflect on her projects and find a new focus. It also provided her the opportunity to come up with a new idea to apply her expertise to recycling N95 masks, whose shortage is a serious problem for front-line health care workers worldwide.

"With no equipment and no one else in the lab, I felt my research career was in crisis. But I wondered if there was anything I could do on my own, with just the small instruments available and using my own hands, like back when I was a student working in a lab," she said. "That's how my little project on masks started."

An N95 mask protects the wearer against airborne particles, including those containing viruses, with an electrically charged filter. The number 95 denotes the minimum percentage of airborne particles that the mask can capture. (Surgical masks wouldn't offer the same protection, Sugihara says, as they don't fit as snugly to faces as N95 masks.) This filter not only physically blocks particles, but also uses static electricity to capture the ones that would otherwise sneak through. But what is less known is that the mask's static electricity is lost over time, especially when the mask is exposed to moisture or disinfectant spray. If the mask is cleaned in a washer, the static electricity could almost completely disappear, causing the face covering to lose its filtering efficiency. 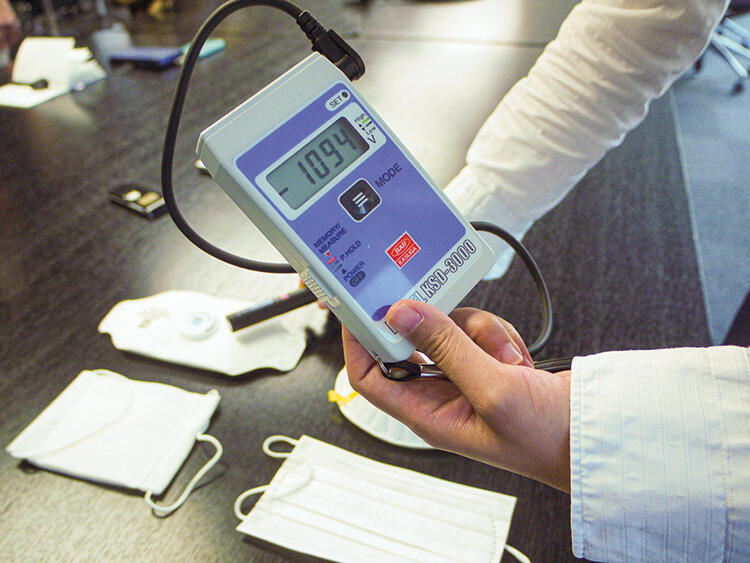 A reading on a static meter shows that an N95 mask has a negative voltage of minus 1,094 volts.

When Sugihara learned through TV news coverage about the shortage of N95 masks and how they were being washed and reused at hospitals, she was alarmed. This is why she started studying whether applying voltage directly to the sterilized masks could restore their static electricity.
Sugihara is currently making a prototype of a hand-held machine where a used and disinfected N95 mask can be sandwiched between two electrically charged metal plates, much like a waffle maker. She is also studying how the weather and humidity affect the strength of static electricity in N95 masks.

Curiosity has always driven Sugihara, who was born in Nagoya and raised in Tokyo. She majored in physics at Keio University in Tokyo before enrolling in a master's program at UTokyo-IIS, pursuing semiconductor physics. But she gradually became interested in working in a field where she can apply her findings to help cure diseases or make people healthy. That's why she switched to biophysical engineering, as it allowed her to combine her physics background and interest in biomedical research.
Sugihara was also interested in studying abroad. While she had no leads or contacts, she "Googled" professors heading biophysical engineering labs at European institutions and contacted them by email, interviewing for and successfully enrolling in a doctoral program at ETH Zurich (Swiss Federal Institute of Technology in Zurich, Switzerland).

There, she was tasked with a project on ion channels, proteins controlling the flow of ions in and out of cells.
"Ion channels, which are located in cell membranes, are like mouths for cells," Sugihara explained. "When they are opened, they let ions pass through the cells, and when they are closed, they block the ions' passage."
Ion channels are particularly important in the brain, where the passage or blockage of ions dictates consciousness, sleep and the visual senses. Scientists study the flow of ions by applying voltage on both sides of cell membranes and measuring the current. When an electric current is registered, it means that an ion channel has opened and has let ions through. 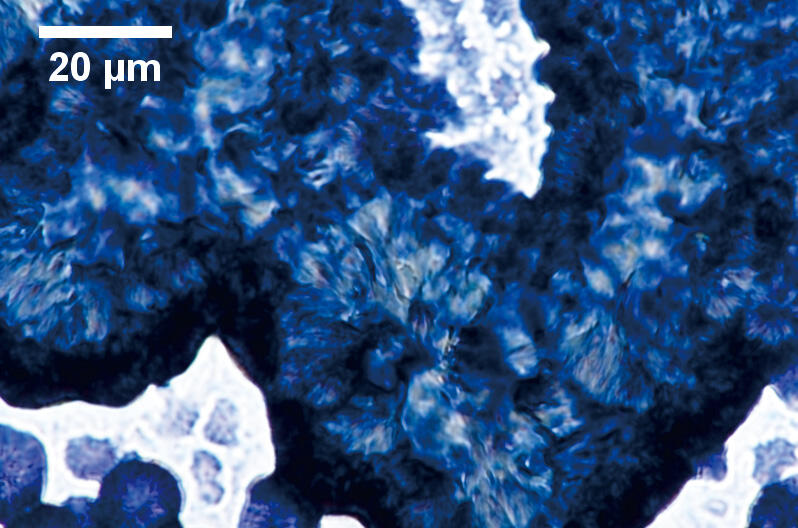 A microscopic image of materials known as mechanochronomic polymers 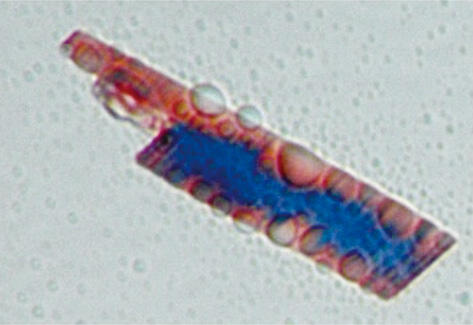 A microscopic image of materials known as mechanochronomic polymers shows that the color of the polymers changes from blue to red where peptides (chains of amino acids) are added. This occurs because the peptides apply force to the polymers by pulling or pushing them. (Originally published in Macromolecules 53 (15), 6469-6475(2020). DOI: 10.1021/acs.macromol.0c00718)

Sugihara's research -- jointly conducted with a Swiss pharmaceutical company - was aimed at improving the efficiency of a machine called the automated patch clamp. Such machines screen millions of chemicals that might switch ion channels on or off. The drugmaker developed the device so it can quickly find chemicals that might work for psychiatric conditions such as sleep disorders and depression. But the machine needed improvement as it wasn't as good as humans at manipulating nanoscale ion channels, she said.

After obtaining her doctor of science degree at ETH Zurich, Sugihara continued research at the intersection of physics, engineering and biology. After a two-year stint as a postdoctoral researcher at the Max Planck Institute for Intelligent Systems in Stuttgart, Germany, she landed a tenure-track assistant professor position at the University of Geneva in 2014, a position she held until her return to Japan this spring.

One of her current research fields is mechanobiology, which studies how physical forces such as tension and osmotic pressure affect cells, tissues and organs. Sugihara says she is particularly interested in technology that helps scientists measure such forces on a nanoscale level. By incorporating a mechanochromic polymer, something that emits fluorescence when it is pushed, into cell membranes, she is hoping to visualize how molecules in living organisms are pushing and pulling cell membranes.

"For example, cancer cells are known to be harder than healthy cells," she said. "Researchers have long sorted cancerous cells from noncancerous ones by looking for proteins found only in the former. But using a special microscope called an atomic force microscope, some researchers are now working to push cells on a nanoscale level, measure the stiffness of the cells and thus determine whether they are cancerous or not."
Sugihara, who calls herself a "tool developer," says she wants to create tools that biomedical researchers can use.

"I consider it my job to work with end users -- such as biologists, pharmaceutical companies and medical doctors -- and to use physics and engineering to come up with applications that meet their needs," she said. "I would like to create what they really need. That's my ultimate goal."

For now, though, she is busy with masks. She also says COVID-19 has given her a chance to think deeply on what she can do during the pandemic.
"Biological experiments often take up to a year to prepare. So I know how hard it is for scientists doing experiments to see their plans get derailed by the pandemic, because they would have to start all over again," she said.
"For my part, I've been trying to produce something out of nothing. And instead of simply continuing what I have researched, I'm taking a hard look again at my research and thinking of new ways to make it grow."