LIMMS, the Laboratory for Integrated Micro Mechatronic Systems, celebrated its 20th anniversary in 2015. In its 24 years of history, it has hosted more than 230 researchers from France and other countries. Since 2004, it became a CNRS UMI (UMI 2820). Its field of research can roughly be grouped into three axes. Nanotechnology, advanced MEMS and bio-MEMS. In 2016 LIMMS direction has highlighted 4 general fields of applications related to BioMEMS for translational research, Integrative Bioengineering, Energy, and Smart sensors in society. LIMMS aims to combine expertise of both Japanese and French researchers and to explore new frontiers in the three highly interdisciplinary fields. In 2014, LIMMS inaugurated a mirror platform in Lille (France), through the SMMIL-E project Seeding Microsystems in Medicine in Lille-European Japanese technologies against cancer. Since 2016, LIMMS has been involved in a Hospital/University research project (RHU iLite) on liver engineering innovation. 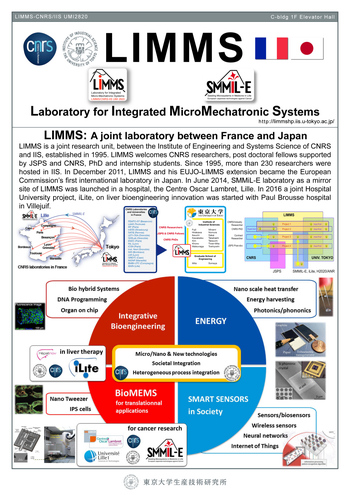