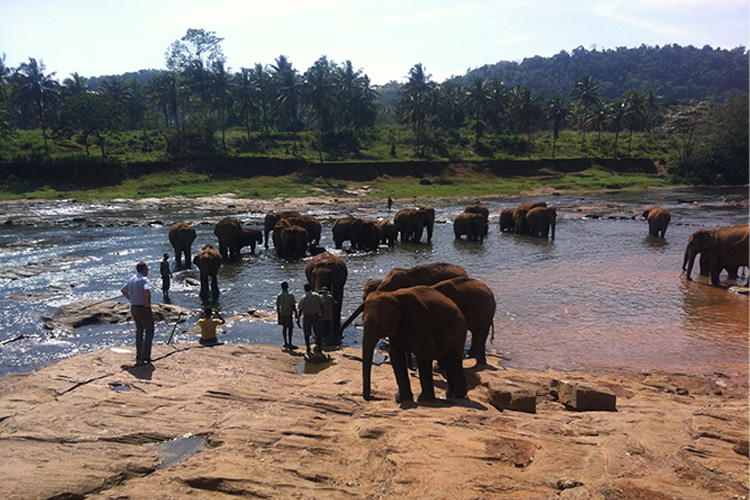 As natural areas become increasingly fragmented, the potential for humans and wildlife to interact is growing. Now, researchers from Japan have found that climate change is altering the risk of such interactions.

In a recent study published in Science of the Total Environment, researchers from the Institute of Industrial Science, The University of Tokyo, examined how the risk of human-elephant conflict could change over time. When humans encroach on natural landscapes, the chances of interactions with wildlife increase. Conflicts can arise when wildlife damages livestock or crops, or when human activities damage animal habitat. For example, forest edges are particularly attractive areas for elephants on the hunt for food, which can bring them into contact with mature crops, or with farmers.

"In Thailand, half of the country's population live in rural areas and rely on agriculture," says lead author Nuntikorn Kitratporn. "Thailand also has about three to four thousand wild elephants and deforestation and the growth of commercial agriculture have pushed elephants into increasingly fragmented patches of habitat, increasing the chance of interactions between humans and elephants."

Climate change is bringing additional complexity to these interactions, as changing environmental conditions lead to changes in the behavior and distribution of elephants. In rural areas where people depend on agriculture to survive, human-elephant conflict may well intensify in the future. To assess the risk of this, the researchers used a risk framework that incorporated different possible scenarios. They used this framework to examine the recent spatial distribution of human-elephant conflict (2000-2019) in Thailand and how it may look in the near future (2024-2044). Different projections of future climate and socioeconomic conditions were incorporated into the framework and the effects on land use were examined.

"We found a spatial shift in risk toward northern areas and higher latitudes," says Nuntikorn Kitratporn. "In other areas, habitat is likely to become less suitable over time, which could first increase and gradually decrease the risk of interactions."

Understanding how human-wildlife interactions may change in the future is vital for long-term planning. The results from this study could be used to develop planning strategies in affected communities and raise awareness of ways in which humans and wildlife can coexist.

The article "Human-elephant conflict risk assessment under coupled climatic and anthropogenic changes in Thailand," was published in Science of the Total Environment at DOI: 10.1016/j.scitotenv.2022.155174