A prosthesis is an artificial device that replaces an injured or missing part of the body. You can easily imagine a stereotypical pirate with a wooden leg or Luke Skywalker's famous robotic hand. Less dramatically, think of old-school prosthetics like glasses and contact lenses that replace the natural lenses in our eyes. Now try to imagine a prosthesis that replaces part of a damaged brain. What could artificial brain matter be like? How would it even work?

Creating neuroprosthetic technology is the goal of an international team led by by the Ikerbasque Researcher Paolo Bonifazi from Biocruces Health Research Institute (Bilbao, Spain), and Timothée Levi from Institute of Industrial Science, The University of Tokyo and from IMS lab, University of Bordeaux. Although several types of artificial neurons have been developed, none have been truly practical for neuroprostheses. One of the biggest problems is that neurons in the brain communicate very precisely, but electrical output from the typical electrical neural network is unable to target specific neurons. To overcome this problem, the team converted the electrical signals to light. As Levi explains, "advances in optogenetic technology allowed us to precisely target neurons in a very small area of our biological neuronal network."

Optogenetics is a technology that takes advantage of several light-sensitive proteins found in algae and other animals. Inserting these proteins into neurons is a kind of hack; once they are there, shining light onto a neuron will make it active or inactive, depending on the type of protein. In this case, the researchers used proteins that were activated specifically by blue light. In their experiment, they first converted the electrical output of the spiking neuronal network into the checkered pattern of blue and black squares. Then, they shined this pattern down onto a 0.8 by 0.8 mm square of the biological neuronal network growing in the dish. Within this square, only neurons hit by the light coming from the blue squares were directly activated.

Spontaneous activity in cultured neurons produces synchronous activity that follows a certain kind of rhythm. This rhythm is defined by the way the neurons are connected together, the types of neurons, and their ability to adapt and change.

"The key to our success," says Levi, "was understanding that the rhythms of the artificial neurons had to match those of the real neurons. Once we were able to do this, the biological network was able to respond to the "melodies" sent by the artificial one. Preliminary results obtained during the European Brainbow project, help us to design these biomimetic artificial neurons."

They tuned the artificial neuronal network to use several different rhythms until they found the best match. Groups of neurons were assigned to specific pixels in the image grid and the rhythmic activity was then able to change the visual pattern that was shined onto the cultured neurons. The light patterns were shown onto a very small area of the cultured neurons, and the researchers were able to verify local reactions as well as changes in the global rhythms of the biological network.

"Incorporating optogenetics into the system is an advance towards practicality", says Levi. "It will allow future biomimetic devices to communicate with specific types of neurons or within specific neuronal circuits." The team is optimistic that future prosthetic devices using their system will be able to replace damaged brain circuits and restore communication between brain regions. "At University of Tokyo, in collaboration with Pr Kohno and Dr Ikeuchi, we are focusing on the design of bio-hybrid neuromorphic systems to create new generation of neuroprosthesis", says Levi.

Neuron culture on MEA are stimulated via optogenetic technique. The light patterns of stimulation are defined by the real-time artificial neural network activity. Pattern stimulation images are created by the conversion of a 64 artificial neural network activity to 8x8 matric image. Each square represents one artificial neuron. When the square is white, it means a spike activity, when it is black, it means no activity. Once a VGA-image is delivered to the video projector, an additional simultaneous TTL signal from the digital hardware board activates the signal generator which controls the power modulation of the blue light source of the video projector. The image generated by the video projector is de-magnified (of about fourteen times) through an adapted up-right epifluorescent microscope and focuses on the neuron culture located at the focal plane of the microscope. The living neurons, at about four weeks in culture and previously transduced with the fast Channelrhodopsin2 variant ChIEF, respond to blue light stimulation with evoked neuronal firing monitored both by red calcium imaging and multi-electrode recordings.

Note that the illumination highlights the metal strip of the electrodes.

The article, "Toward neuroprosthetic real-time communication from in silico to biological neuronal network via patterned optogenetic stimulation," was published in Scientific Reports at DOI: 10.1038/s41598-020-63934-4. 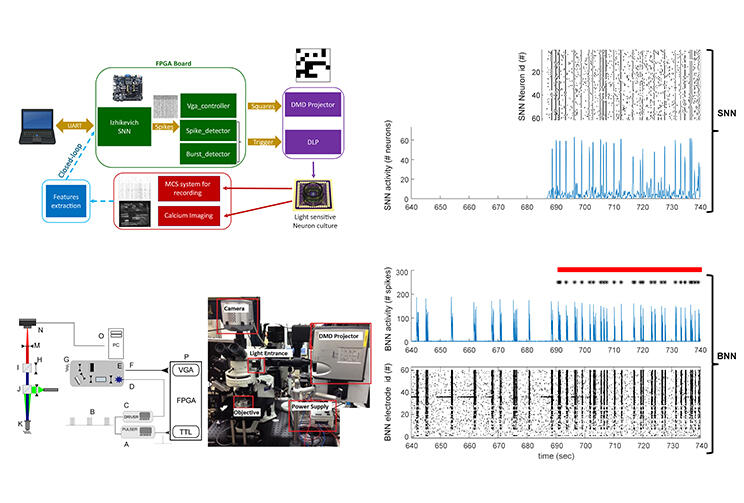