Simulations from researchers in Japan provide new insights into the reactions occurring in solid-oxide fuel cells by using realistic atomic-scale models of the active site at the electrode based on microscope observations as the starting point. This better understanding could give clues on ways to improve performance and durability in future devices.

Extremely promising for the clean and efficient electricity generation, solid-oxide fuels cells produce electricity through the electrochemical reaction of a fuel with air, and they have already begun to find their way into homes and office buildings throughout Japan.

In a typical fuel cell, oxygen molecules on one side of the fuel cell first receive electrons and break up into oxide ions. The oxide ions then travel through an electrolyte to the other side of the device, where they react with the fuel and release their extra electrons. These electrons flow through outside wires back to the starting side, thereby completing the circuit and powering whatever is connected to the wires.

Although this overall reaction is well known and relatively simple, the reaction step limiting the overall rate of the process remains controversial because the complicated structures of the electrodes--which are generally porous materials as opposed to simple, flat surfaces--hinder investigation of the phenomena at the atomic level.

Since detailed knowledge about the reactions occurring in the devices is vital for further improving the performance and durability of fuel cells, the challenge has been to understand how the microscopic structures--down to the alignment of the atoms at the different interfaces--affect the reactions.

"Computer simulations have played a powerful role in predicting and understanding reactions that we cannot easily observe on the atomic or molecular scale," explains Michihisa Koyama, the head of the group that led the research at Kyushu University's INAMORI Frontier Research Center.

"However, most studies have assumed simplified structures to reduce the computational cost, and these systems cannot reproduce the complex structures and behavior occurring in the real world."

Koyama's group aimed to overcome these shortcomings by applying simulations with refined parameters to realistic models of the key interfaces based on microscopic observations of the actual positions of the atoms at the active site of the electrode.

Leveraging the strength of Kyushu University's Ultramicroscopy Research Center, the researchers carefully observed the atomic structure of thin slices of the fuel cells using atomic-resolution electron microscopy. Based on these observations, the researchers then reconstructed computer models with the same atomic structures for two representative arrangements that they observed.

Reactions between hydrogen and oxygen in these virtual fuel cells were then simulated with a method called Reactive Force Field Molecular Dynamics, which uses a set of parameters to approximate how atoms will interact--and even chemically react--with each other, without going into the full complexity of rigorous quantum chemical calculations. In this case, the researchers employed an improved set of parameters developed in collaboration with Yoshitaka Umeno's group at the University of Tokyo.

Looking at the outcome of multiple runs of the simulations on the different model systems, the researchers found that the desired reactions were more likely to occur in the layers with a smaller pore size.

Furthermore, they identified a new reaction pathway in which oxygen migrates through the bulk layers in a way that could potentially degrade performance and durability. Thus, strategies to avoid this potential reaction route should be consider as researchers work to design improved fuel cells.

"These are the kinds of insights that we could only get by looking at real-world systems," comments Koyama. "In the future, I expect to see more people using real-world atomic structures recreated from microscope observations for the basis of simulations to understand phenomena that we cannot easily measure and observe in the laboratory." 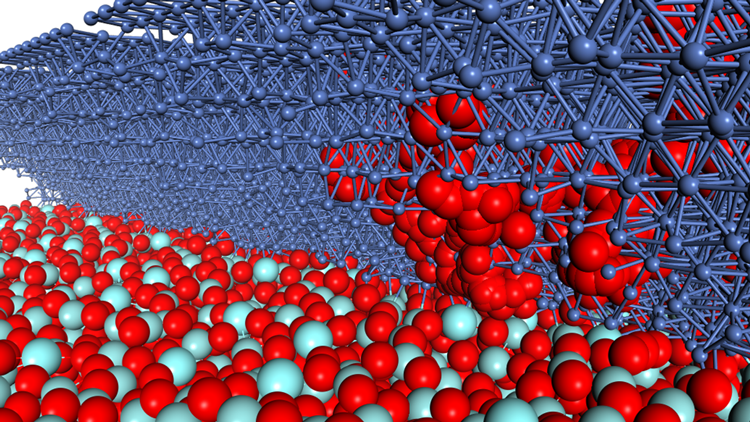 Fig. The initial positions of the atoms in this computer model of a solid-oxide fuel cell were based on observations of the actual atomic configuration using electron microscopy. Simulations using this model revealed a previously unreported reaction (red path) in which an oxygen molecule from the yttria-stabilized zirconia layer (layer of red and light blue balls) moves through the bulk nickel layer (dark blue balls) before forming OH on the nickel surface.