In 2015, to combat the urgent threats posed by climate change, most of the world's countries came together to establish the Paris Agreement: an ambitious plan to prevent the global temperature from rising 2°C above pre-industrial levels, and to work to further limit that temperature rise to 1.5°C.

These seemingly small numbers can mask the staggering impact and complexity that shifts in global temperature represent. For example, increased global temperature will also intensify the hydrologic cycle, significantly changing the frequency and intensity of rainfall. Flooding, droughts, mudslides, and food and water insecurity are just some of the many hazards of the resulting changes in rainfall patterns.

To understand what the future may hold, and to shape policies and behaviors that guide this outcome, researchers at The University of Tokyo, along with international collaborators, have developed a new metric for evaluating the intensification of wet and dry spells under the effects of global warming. They call it the "event-to-event hydrological intensification index," or E2E, as described in a new study published in Scientific Reports.

"The E2E combines normalized aggregated precipitation intensity and dry spell length to capture the interconnectivity of adjacent dry and wet spells and the intensification of their phase shifts," explains corresponding author Hyungjun Kim.

The research team conducted multi-model ensemble experiments to compare the E2E between scenarios with 1.5°C and 2°C of warming. Overall, warming was associated with a clear increase in the E2E, with significant additional increase from 1.5°C to 2.0°C of warming.

In addition, the study revealed geographic trends in changes in rainfall intensity under these warming scenarios. For example, more intense precipitation is predicted across much of North America and Eurasia, whereas more intense droughts are projected for the Mediterranean region. Another key finding was that the most extreme intensification would be about 10 times greater than the average intensification.

"Our results suggest that extreme dry and wet events will increasingly co-occur, such as the switch from extreme drought to severe flooding we saw in California in the recent past," says lead author Gavin D. Madakumbura. "At least in terms of disaster mitigation and water security, there would be significant benefits to limiting global warming to 1.5°C to dampen the intensification of event-to-event variability." 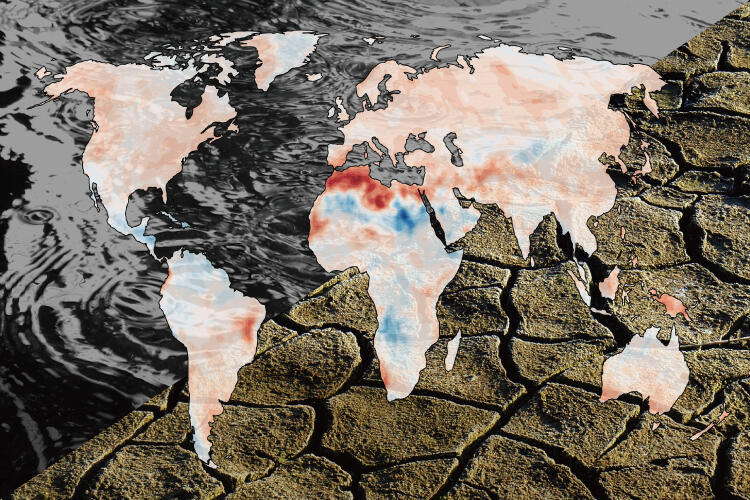