News
News
2019.03.26
Press Release
A fascinating phase transition: from one liquid state to another

A team at The University of Tokyo described in unprecedented detail the rare phenomenon called "liquid-to-liquid phase transitions" in a pure substance. By showing how a liquid made of just one type of molecule can switch between liquid and glassy states, this research may lead to a novel way to control the transport properties of a liquid.

Phase transitions are a familiar part of daily life. Whenever you see ice melting (solid to liquid), or steam coming from a teakettle (liquid to gas), you've just experienced a phase transition. However, the study of how one arrangement of molecules changes into another reveals complex details about the strength of their interactions. In conventional phase transitions, as with an iron bar melting into molten metal, added heat causes the atoms to vibrate so violently that they break free of their solid lattice arrangement and assume a liquid form. The team at The University of Tokyo studied a much rarer type of phase transition: from one liquid state to another. In this research, they found that, even without changing temperature, relatively free-flowing triphenyl phosphite could gradually vitrify into a glassy state, in which the molecules remain disordered but are much less mobile. The different phases were identifiable experimentally based on how quickly the molecules could relax after being perturbed.

"Contrary to intuition, there has been a growing body of experimental and theoretical evidence that even a single-component substance may have multiple liquid states," says lead author Hajime Tanaka. They found that the phase transition can occur in two very different ways. The first is called "nucleation and growth," a slow process that requires the emergence of one phase in the other overcoming a barrier to get started. The other type is spinodal decomposition, in which the transition can smoothly proceed without any barrier. The researchers also discovered a critical temperature, above which only nucleated growth could occur, but below this temperature, spinodal decomposition was possible.

"From the viewpoint of practicality, triphenyl phosphite may be one of the best systems for studying liquid-to-liquid transitions, since the transformation takes place at ambient pressure and moderate temperatures," says first author Ken-ichiro Murata. "Phase transitions, particularly those that involve a change from a liquid to a glassy state, are often used in the manufacturing of polymers. This research may greatly enhance our ability to optimize and control these processes."

Journal article
Ken-ichiro Murata and Hajime Tanaka. "Link between molecular mobility and order parameter during liquid-liquid transition of a molecular liquid," Proceeding of the National Academy of Sciences of the United States of America.
DOI: 10.1073/pnas.1822016116 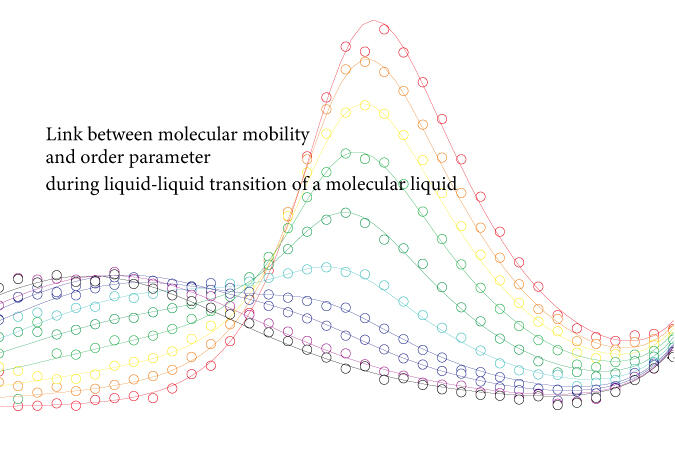