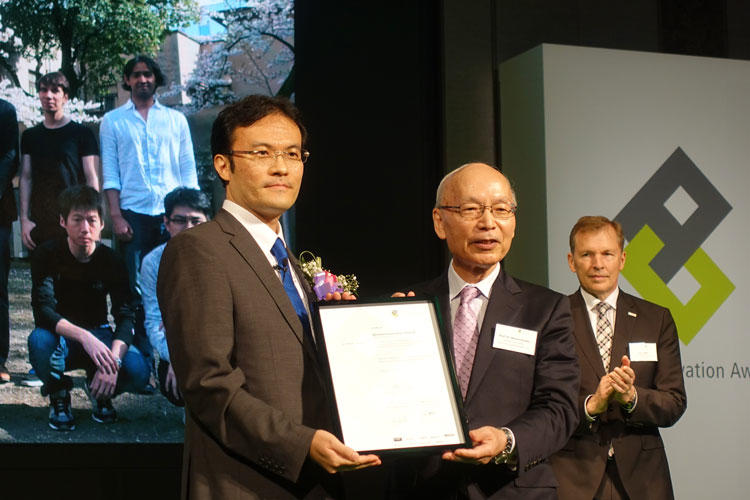 The Gottfried Wagener Prize honors young scientists under 46 years of age in Japan for path-breaking and application-oriented research work in the following four categories: Materials, Digitalization and Mobility, Energy and Life Sciences.

Since heat dissipation is a problem in many optical and electrical devices, thermal conduction is a common facet of everyday life. The phenomenon of thermal conduction can be explained in terms of the vibrating lattices that carry heat as quasi particles called phonons. The ability to control phonons, which have wave-like properties, within solids has opened up the new field of phonon engineering (heat transfer engineering). The physicist Masahiro Nomura is engaged in efforts to control thermal conduction through this method. By creating periodic, circular, nanometer-size holes in a thin silicon film through nano-processing, Associate Professor Nomura and his associates have produced heat flow in a specific direction and have realized the heat focusing at a single point within a solid for the first time. By doing so, they have overturned the commonly accepted notion that heat diffuses in all directions. They have also demonstrated that control of thermal conduction based on wave property is possible by altering the periodic properties of these artificial crystal structures, which are called phononic crystals. This pioneering experiment has shown that advanced thermal control can be accomplished through the design of nanostructures. Furthermore, through joint research conducted with Professor O. Paul's group in the University of Freiburg in Germany, Associate Professor Nomura and his associates have greatly enhanced the thermoelectric conversion capabilities of silicon-based materials by applying multi-scale structures to thermal phonons distributed over a wide range of frequency levels.

These results not only contribute to the resolution of heat dissipation issues for semiconductor chips and other materials, but are also important for the creation of innovative technologies in the field of energy harvesting (environmental power generation) through thermoelectric conversion. As the pioneer of a new field, Associate Professor Nomura envisions using the wave properties of heat and "treating heat like light" as "one of the important themes for scientific and energy problems in the 21st century."