Tokyo - Researchers at University of Tokyo Institute of Industrial Science (IIS) report a new physical model that shows how the topology of a porous material influences the phase separation of binary mixtures. The model uses two variables, the density field of a porous structure and the composition field of a binary mixture, to show that topology has very different effects on phase separation depending on the porous structure being random and either 2D or 3D. The study can be read in Science Advances.

As IIS Professor Hajime Tanaka, who led the study, explains, the phase separation of binary mixtures, or demixing, in porous materials depends on two factors.

"Phase separation, surface wettability and the geometrical structure of the pore are all interconnected. Structure depends on size and topology. It is very difficult to study topology."

Understanding this influence has applications in widely different fields including battery, medical diagnostics and oil extraction.

Previous studies have generally assumed that pores can be approximated to be an assembly of straight cylinders, but in reality the shapes are random and can take different topologies, complicating the kinetics of the separation. To understand these effects, Tanaka and his collaborator, Dr. Ryotaro Shimizu, developed a novel phase-field model to observe how two mixed substances separate when immersed into a porous material at different levels of surface wettability and two different topologies, 2D or 3D. The model showed a clear relationship between demixing and wetness, but one that was greatly influenced by the topology.

"Only 3D porous structures can be bicontinuous," said Shimizu.

The significance of this distinction leads to unique conformations in 3D structures that Shimizu calls "double-network structures". The result is different kinetics in the phase separation due to different topologies in the pore structure.

"Our study shows that the difference in the pore geometry causes drastic differences in the phase separation," said Tanaka. 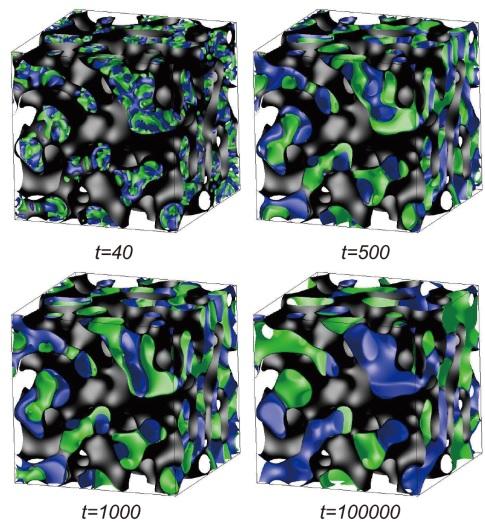 TWO DEMIXED PHASES Two demixed phases [the green and blue phases] are shown together with the porous structure surface (black).