Electricity is used to power your car or home, it is also used to power your heart and brain. Batteries in machines or cells in the body conduct electricity by passing ions through liquids. Liquid properties such as viscosity and conductance determine the performance of machines. These properties reflect how ions move in the liquid, but there is poor understanding of how ions move at the atomic level.

A new study by researchers at University of Tokyo's Institute of Industrial Science (IIS) reports the first direct observation of gold ions moving in liquid. The study, which can be read in Science Advances, is expected to provide a basis for more energy efficient devices.

This heterogeneity has never been directly observed, but is thought to have a significant impact on the properties of a liquid.

Mizoguchi led a team of researchers to observe gold ions diffusing in an ionic liquid. To do so, they put the liquid into an annular dark-field scanning transmission electron microscopy (ADF-STEM) system which was developed by JEOL Ltd. In ADF STEM, the brightness of the ion depends on the atomic number, and among metals gold has one of the highest. Also in ADF-STEM, the liquid is placed in a vacuum. Normal liquids evaporate in vacuum, but this is not so for ionic liquids because of their strong electrostatic interactions.

ADF STEM observations revealed that gold ions behave with a distinguishing type of diffusion in liquid.

"We found gold ions were trapped in small spaces or cages. The cages were made by counterionic solvent molecules," said first author Tomohiro Miyata.

These cages would move with gold inside of them, but sometimes the gold would escape to enter another cage through what Miyata describes as a "cage-jump".

The different dynamics were likely due to the heterogeneity of the ionic liquid. By tracing the movement of gold ions, the researchers could then quantify fundamental atomic properties of the liquid, including the diffusion coefficient and the activation energy.

Understanding the liquid behavior at the atomic level is expected to contribute to the design of batteries with less volatility and flammability along with better conductivity for more energy efficient devices. 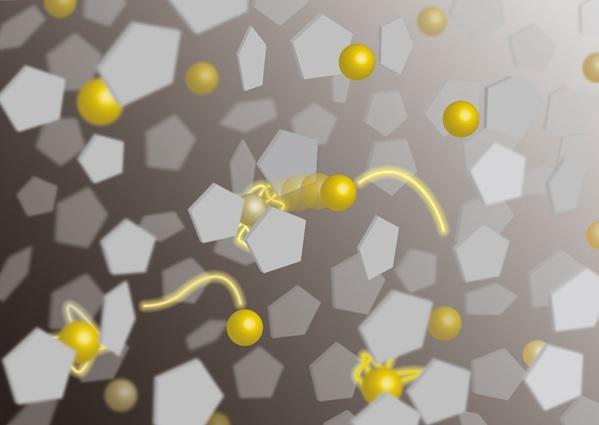