Japanese scientists have figured out how ladybugs fold their wings by transplanting a transparent artificial wing onto the insect and observing its underlying folding mechanism. The study's findings, which help explain how the wings can maintain their strength and rigidity during flight, while becoming elastic for compact folding and storage on the ground, provide hints for the innovative design of a wide range of deployable structures, from satellite antennas to microscopic medical instruments to articles for daily use like umbrellas and fans.

Ladybugs are highly mobile insects that can switch between walking and flying with ease and speed because they can quickly deploy and collapse their wings. Their wings consist of the hardened elytra, the forewings with the familiar spots, and the soft-membrane hindwings used for flight, which are covered and protected by the elytra.

Previous studies have suggested that up-and-down movements in the abdomen and complex origami-like crease patterns on the wings play an important role in the folding process, but how the simple motion produces such an intricate folded shape remained a mystery. Ladybugs close their elytra before wing folding, preventing observation of the detailed process, and as the elytra are essential elements for folding, they also cannot be removed to reveal what lies underneath.

To study the folding mechanism and structure, a Japanese research group constructed a transparent artificial elytron from ultraviolet light-cured resin—often applied in nail art—using a silicon impression of an elytron they removed from a Coccinella septempunctata spotted ladybug, and transplanted it to replace the missing forewing.

The group, led by Research Associate Kazuya Saito of the University of Tokyo's Institute of Industrial Science, then used high-speed cameras to observe the hindwing's folding and unfolding movements. The scientists found that the ladybugs skillfully use the edge and lower surface of the elytron, whose curvature fits the characteristic curve shape of hindwing veins, to fold the wings along crease lines, together with abdominal lifting movements resulting in the rubbing and pulling of the hindwings into their dorsal storage space.

"I wasn't sure if the ladybug could fold its wings with an artificial elytron made of nail-art resin," says Saito. "So I was surprised when I found out it could."

Moreover, the researchers used micro computed tomography (CT) scanning to investigate the three-dimensional (3D) shapes of folded and unfolded wings, and bending points in the rigid area of the hindwings to understand the wing transformation mechanism giving rise to rigidity and strength necessary for flying, and elasticity facilitating folding. They revealed that a curved shape in the veins, much like that of tape spring—the apparatus used for measuring also known as carpenter tape—helps support the wings. Similar tape spring-like structures—strong and firm when extended, but which can be arbitrarily bent and stored in compact form—are widely used in extension booms and hinges of space deployable structures like satellite antennas.

"The ladybugs' technique for achieving complex folding is quite fascinating and novel, particularly for researchers in the fields of robotics, mechanics, aerospace and mechanical engineering," says Saito.

Understanding how ladybugs can achieve the conflicting requirements of fortifying their hindwings with strength and stability for flight, while also making them pliable for folding and compact storage after landing has significant implications for engineering science. 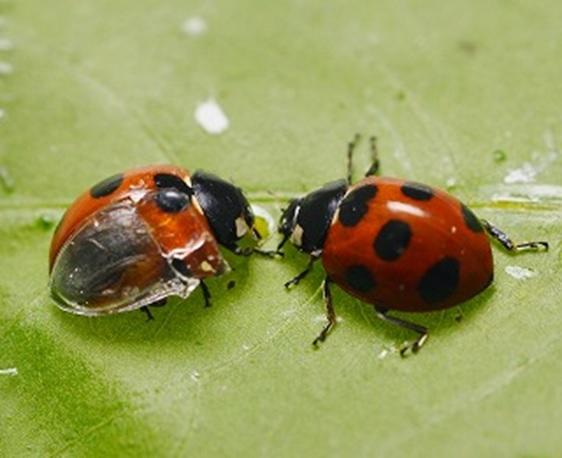 Figure 1
Title: Ladybug with artificial wing
Caption: Researchers transplanted a transparent artificial forewing, or elytron, onto a Coccinella septempunctata seven-spotted ladybug (left) to observe its wing-folding process in detail. The artificial wing is made of ultraviolet light-cured resin and constructed from a silicon impression of the elytron's undersurface. 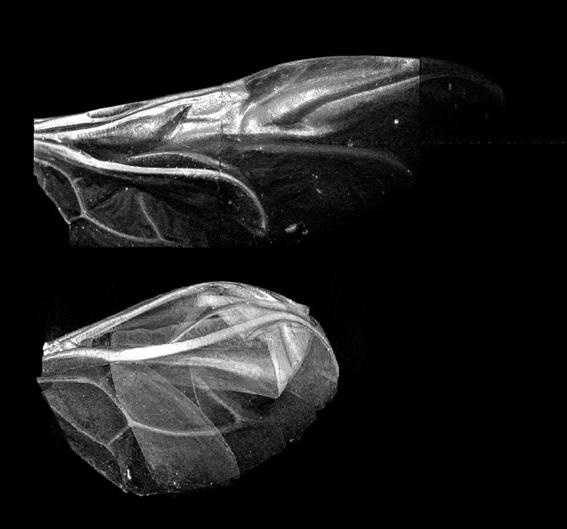 Figure 2
Title: 3D image of unfolded and folded hindwing of Coccinella septempunctata ladybug
Caption: Researchers used micro-CT scanning to obtain this image. A ladybug skillfully uses its abdomen and elytra to achieve this complicated folding. The supports in the wings have a simple structure without clear articulations. The folding and unfolding motions effectively use the elastic deformation of the structures.
Copyright: 2017 Kazuya Saito.

About the University of Tokyo
The University of Tokyo is Japan's leading university and one of the world's top research universities. The vast research output of some 6,000 researchers is published in the world's top journals across the arts and sciences. Our vibrant student body of around 15,000 undergraduate and 15,000 graduate students includes over 2,000 international students. Find out more at http://www.u-tokyo.ac.jp/en/ or follow us on Twitter at @UTokyo_News_en.