The Yoshinori Kobayashi Laboratory at the University of Tokyo's Institute of Industrial Science, the Research Institute of Energy Frontier at the National Institute of Advanced Industrial Science and Technology, Hitachi Zosen Corporation, JGC Corporation, and EX Research Institute Ltd. have established a carbon capture and reuse (CCR) study group with the aim of supplying alternative energy combining industrial carbon emissions with hydrogen produced from renewable energy sources toward achieving effective carbon neutrality that reduces use of fossil fuels.

The Paris Agreement that reached at the 2015 United Nations Climate Change Conference (COP 21) committed to holding the increase in global average temperature to well below 2oC above pre-industrial levels. To accomplish this goal, it is imperative that a new energy supply system centering on renewable energy and other non-fossil fuel sources be established to replace the current system largely dependent on fossil fuels. As it stands, carbon emissions must be reduced at twice the current speed to attain the 2oC goal. Considering that a delay in efforts means a quicker expansion of the burden of emission reductions on future generations, effective carbon neutrality that reduces use of fossil fuels is an urgent priority.

Meanwhile, of all energy consumed, 40% is electrical energy and 60% is thermal energy. This suggests an ongoing need for fuel to generate thermal energy. Considering that a large portion of current technologies harnesses renewable energy sources such as wind and sunlight primarily to generate electrical energy, the establishment of a technology for producing fuel from renewable energy sources would be revolutionary.

The CCR study group believes the solution to both of these challenges is a supply of alternative energy produced from renewable energy sources, and to this end it is necessary to 1) establish a technology, 2) communicate the social significance of the technology, 3) explore model processes, and 4) build a platform for promoting practical application.
Specifically, the study group will undertake the following initiatives:

1.Establish a technology for reacting hydrogen obtained through electrolysis of recovered carbon dioxide and renewable energy to produce methane and other fuels for generating thermal energy, and communicate the social significance of the technology
2.Establish a technology for storing surplus electricity resulting from supply-demand imbalance in the form of fuel to level the fluctuating supply of renewable energy sources, and communicate the social significance of the technology
3.Explore processes for addressing the diversity of renewable energy sources, such as cost-effective methods for separating and recovering carbon dioxide emitted from various industries, viable methods for operating the process of producing renewable energy and fuel, distributed models, and centralized models
4.Build a platform for promoting practical application

Supplying alternative energy combining industrial carbon emissions as an energy carrier with hydrogen produced from renewable energy sources?the CCR study group envisions presenting this as an approach to effective carbon neutrality that reduces use of fossil fuels, and contributing to the creation of a new energy supply system by 2050. 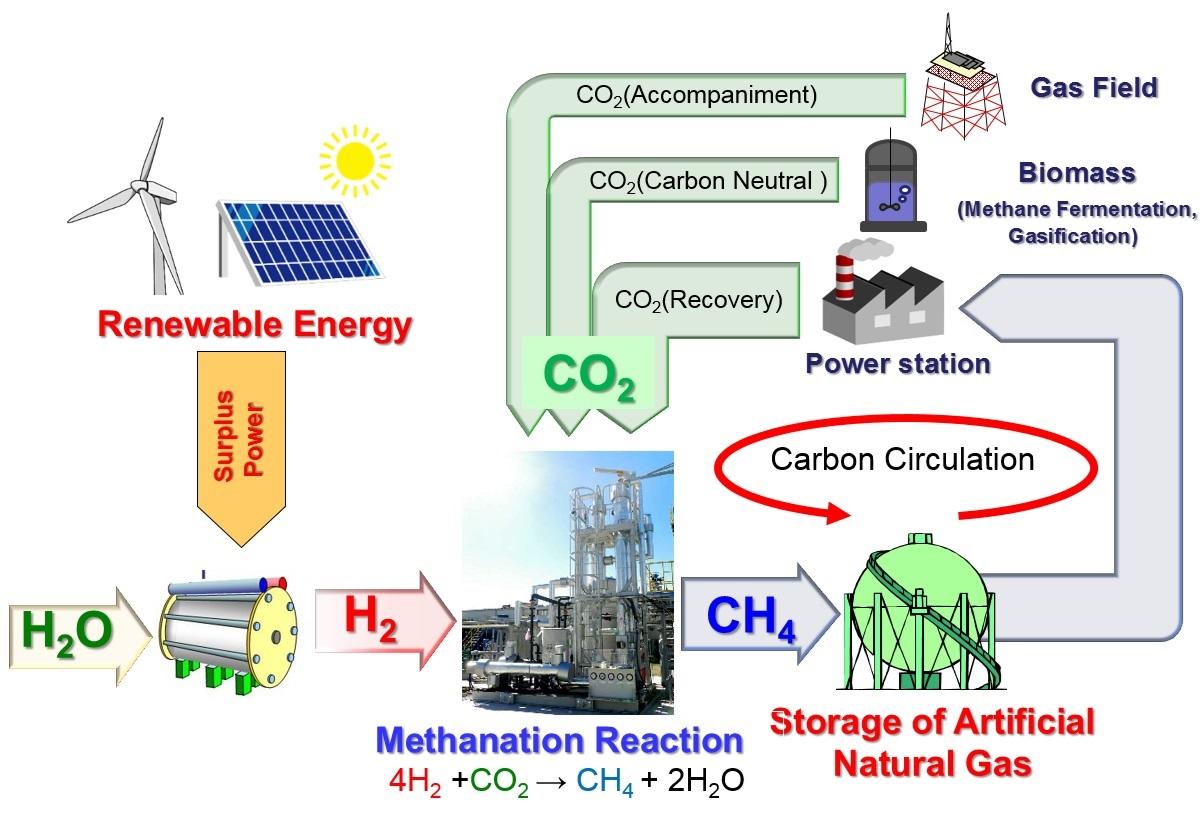