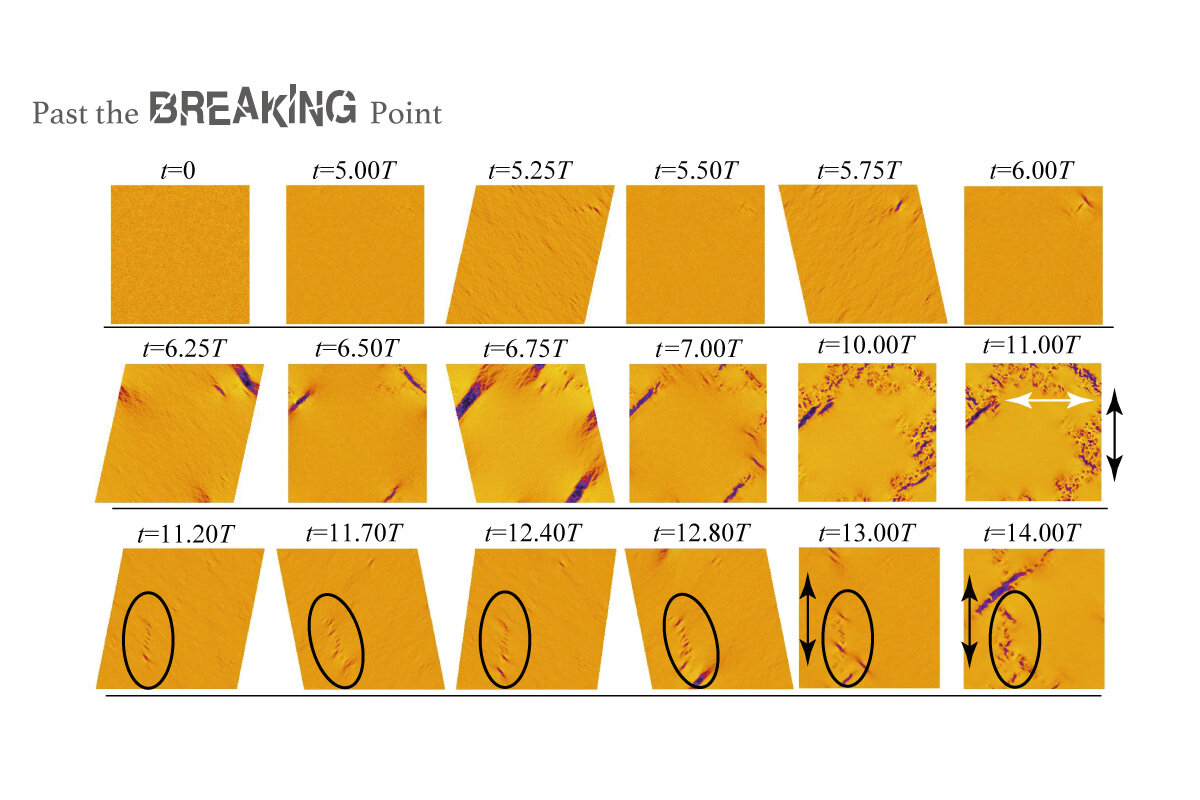 Damage to industrial parts is expensive, results in delays, and may be unsafe to plant workers. But now, scientists from Japan have simulated fracture initiated in materials that share a particular physical characteristic and are widely used across domestic, industrial and scientific applications. Their work showed surprising results that may help prevent damage to industrial parts.

If you've ever been bored in a meeting and tried playing with a metal paperclip to pass the time, you may have noticed something surprising. Although the paperclip starts flexible and returns to its original shape several times, after enough cycles it may suddenly snap. This is an example of "fatigue," in which cracks and defects build up as an object is subjected to cyclic loading and unloading of stress. Material fatigue is a significant concern in many industrial applications, and especially for machine or airplane parts that experience many cycles of stress, but for which a sudden failure could be catastrophic. As a result, obtaining a better understanding of the underlying process of material fatigue could have significant benefits, especially for non-crystalline materials.

Now, a team of researchers at the Institute of Industrial Science, The University of Tokyo, studied the physical mechanisms of low-cycle fatigue fracture in the case of amorphous solids, such as glass or plastics, using computer simulations. For crystalline materials, it has been shown that preexisting defects and grain boundaries can initiate a fracture because of fatigue. However, the corresponding mechanism in amorphous materials is not well understood. While it seems intuitive that the stress required for a fracture to occur is much smaller for cyclic stresses compared with constant stress, this was not what the scientists found. "Contrary to the common belief, we showed that the critical strain in disorder materials that corresponds with the onset of irreversible deformation is the same for both fatigue and monotonic fractures," says co-author Yuji Kurotani.

This is because, for ordinary amorphous systems, higher density leads to more elasticity and slower dynamics. This density dependence of mechanical properties couples the shear deformation with density fluctuations. The cyclic shear can then amplify density fluctuations until the sample breaks via cavitation, in which voids are produced. "This situation is like a crowded train," says co-author Hajime Tanaka. "Dynamic and elastic asymmetries with respect to density changes can lead to a link between shear deformation and density fluctuations." These authors mention that these results should be confirmed with experiments, which would also help material scientists better understand the initiation of fractures.

The work is published in Communications Materials as "Fatigue fracture mechanism of amorphous materials from a density-based coarse-grained model" (DOI:10.1038/s43246-022-00293-9).