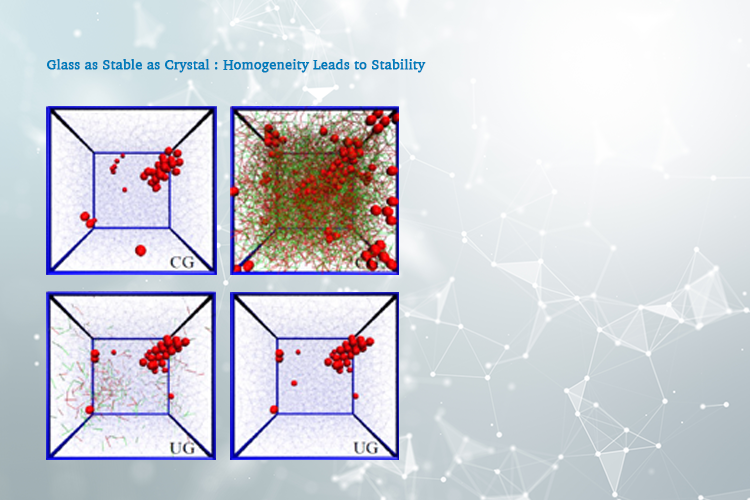 Scientists from The University of Tokyo Institute of Industrial Science used computer simulations to study the aging mechanism that can cause an amorphous glassy material to turn into a crystal. They find that removing tiny irregularities in local densities help prevent the atomic "avalanches" that trigger ordered structure formation. This work may lead to more stable glassy materials, including for pharmaceutical applications.

Glasses are highly unusual solids in that they lack an organized crystal structure. In fact, they are more like "frozen liquids," because the atoms can get stuck in non-equilibrium positions. Over time, some glasses experience an aging process or devitrification, in the latter of which the amorphous configuration settles into a more regular structure. In most cases, devitrification is undesirable, as it can turn previously transparent materials opaque. In addition to aesthetic considerations, the lack of stability can cause damage to glass panes, as well as pharmaceuticals or optical media. However, the physical mechanism that triggers aging or devitrification remains poorly understood.

The team of researchers, led by The University of Tokyo Institute of Industrial Science, used computer simulations to study the process of devitrification. Instead of thermal annealing, the team took a novel approach by starting with a "conventional glass" and progressively removing inhomogeneities in density until a "uniform glass" was formed. This new state showed unprecedented stability against devitrification. Lead author Dr. Taiki Yanagishima says, "This uniform glass state shows there is a clear connection between the stability of a glass state and its mechanical homogeneity."

As with other forms of crystal growth, devitrification starts when a tiny "seed" crystal, called a nucleus, recruits neighboring atoms to arrange themselves in the same pattern. But unlike in liquids, the "seeds" in glasses only grow when they are given a shake by large intermittent coordinated movements of atoms called "avalanches." In previous work, the researchers showed that these sudden events corresponded to destabilizations of the load-bearing network that spans the entire sample, and hypothesized that they were the only mechanism by which atoms may rearrange themselves. Making the glass more uniform prevents this relaxation and devitrification, even when nuclei are present. "When avalanches are prevented, nuclei that normally would grow into crystals are instead frozen in their glassy state," senior author Professor Tanaka says. This leads to the possibility that by making the number of load-bearing atomic neighbors more uniform across the sample, ultra-stable glasses may be formed. This "mechanical homogenization" may open the way for stronger and more stable glasses.

The work is published in Physical Review Letters as "Towards glasses with permanent stability" (DOI:10.1103/PhysRevLett.127.215501).