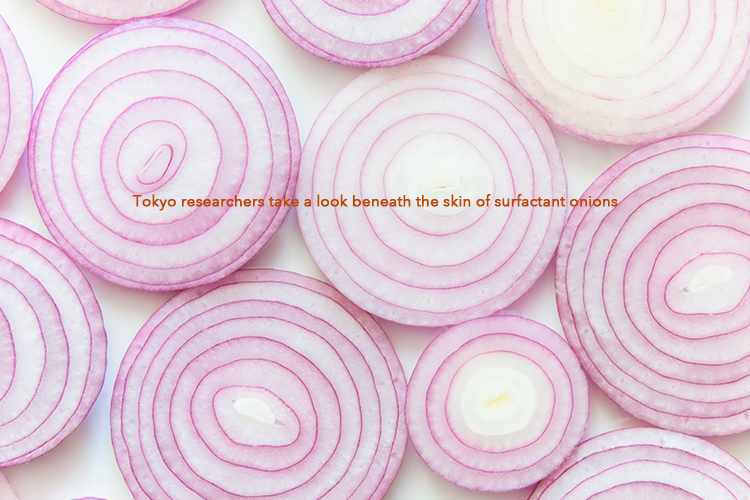 Surfactant onions form when layers of surfactant molecules organize around each other into a sphere. They are easily pictured by thinking of their vegetable namesake. Until now it has not been clear whether surfactant onions are perfect layered structures or whether they contain defects. Researchers from The University of Tokyo Institute of Industrial Science have used microscopy to get a better understanding of surfactant onion layers, which is important for their potential application. Their findings are published in Physical Review Research.

Surfactants are amphiphilic molecules that are a bit conflicted. One part of them loves water, while the other part loves substances like oil. However, this indecision leads to some very interesting properties. For example, when they are in water, surfactant molecules organize themselves into structures so that only the water loving parts are exposed to water molecules.

These structures include flat layered structures, continuous sponges where the molecules organize around pockets in the structure, and onions. The onion structure is thought to be a tight ball of perfectly formed layers. However, it isn't known whether this is the case, or whether they contain the sort of defects you would see if you cut into the vegetable.

This question is particularly important if onions are used as vehicles for carrying drugs or other therapeutics, as it may affect their ability to keep the cargo inside. The researchers used optical microscopy to capture the process when onion structures merge into planar layers to get an answer.

"There is a variety of ways of forming onion structures, for example the molecules can be organized in different ways initially, or different methods can be used to drive their formation," explains study lead author Yoshimasa Izaki. "We previously reported the formation of onions from surfactant sponges, so we were interested in getting a more thorough understanding of these structures."

The team followed changes in the structures when onions merged into flat layer arrangements. They saw that the onion structures were not seamless and in fact had defects around the axis that passes through the center. So, although one slice through the onion was symmetrical, the structure didn't have complete spherical symmetry.

"If you think about the inconsistencies in the center of an actual onion, it turns out that surfactant onions formed from sponges bear even more of a resemblance to their namesake than we originally thought," says study corresponding author Hajime Tanaka. "Our findings are important for the design of onion-based containment systems. We hope that they will support the development of effective therapeutic carrier systems."

The study, "Hidden linear defects in surfactant onions revealed by coalescence into lamellar layers", was published in Physical Review Research at DOI: 10.1103/PhysRevResearch.3.043094.