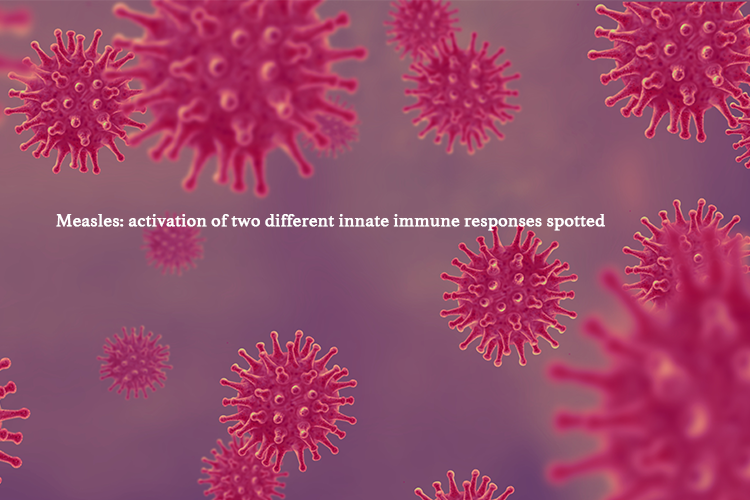 Researchers from The University of Tokyo Institute of Industrial Science have found that infection with the measles virus activates not one but two different branches of the innate immune system. This is because of the effect of the measles virus on small structures within cells called mitochondria.

Measles is a significant disease worldwide, causing high levels of child mortality. Viral genomes can be made of either RNA or DNA, and the host immune response to each differs. RNA viruses such as the measles virus activate a molecule called RIG-I, whereas DNA viruses activate a different molecule called cGAS. These molecules then trigger a cascade of activation of other molecules such as interferon, leading to an immune response to the virus.

"We first showed mitochondrial abnormalities in measles-infected cultured cells using imaging techniques," says lead author Hiroki Sato. "Then we confirmed the presence of mitochondrial DNA in the cytosol of infected cells through biochemical analysis, and then carried out experiments on mice lacking the cGAS protein to show that the immune response was also caused by the cGAS pathway."

This is the first time that single and negative strand RNA viruses have been shown to activate the cGAS pathway. "We suggest that there are two steps to measles infection," says senior author Chieko Kai. "In the first, early phase, viral RNA replication is detected by the RNA-sensing immune response, and then in a second, later phase, mitochondrial downregulation and release of mitochondrial DNA cause prolonged interferon production."

The team then found evidence in previously published datasets to suggest that this response can also be triggered by other viruses that affect the growth and development of mitochondria. They therefore suggest that this is an important host mechanism for a full immune response to such viruses. Increased understanding of how the body works to combat an infection such as measles may help to eradicate this disease for good.

The article, "Downregulation of mitochondrial biogenesis by virus infection triggers antiviral responses by cyclic GMP-AMP synthase", was published in PLOS Pathogens at DOI:10.1371/journal.ppat.1009841