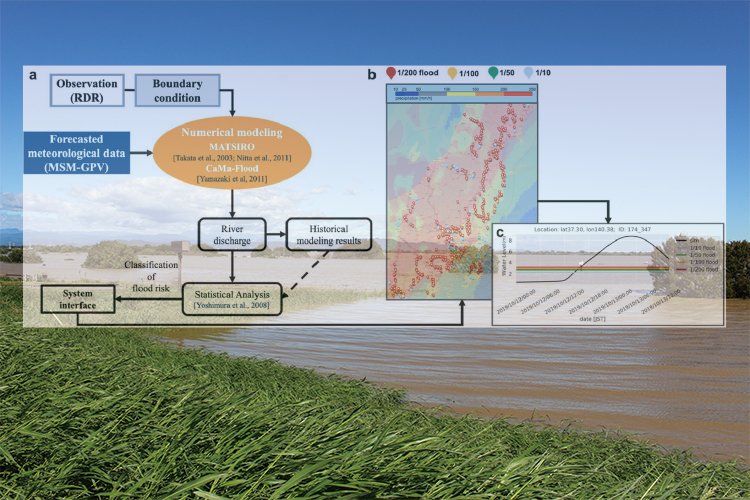 Tokyo, Japan - In Japan, thousands of homes and businesses and hundreds of lives have been lost to typhoons. But now, researchers have revealed that a new flood forecasting system could provide earlier flood warnings, giving people more time to prepare or evacuate, and potentially saving lives.

In a study published this month in Scientific Reports, researchers from The University of Tokyo Institute of Industrial Science have shown that a recently developed flood forecasting system provides much earlier advance warnings of extreme flooding events than current systems. Floods are one of the most common natural disasters and are increasing in frequency. In 2019, Typhoon Hagibis swept across parts of Japan causing severe flooding that resulted in 86 deaths and approximately 400 billion dollars' worth of damage. Most urban areas in Japan lie within a floodplain and typhoons can result in rapid and dangerous flooding. Early warning systems can help people to prepare for imminent flooding, but people need sufficient time to do so.

"Current warning systems can provide accurate flooding predictions, but with only a few hours' notice" says lead author of the study Wenchao Ma. "Because people need more time to respond effectively to flood warnings, we investigated whether a newly developed flood forecasting system could accurately predict flooding locations with a longer lead time."

Flooding predictions in Japan are currently based on gauged upstream water levels. The new system is based on models of the land surface and river routes that used together can simulate the movement of water in floodplains. These models are combined with meteorological data like rainfall, temperature, and wind speed, and statistical analysis; the result is flood predictions for all rivers in Japan.

One of the main challenges with forecasting floods is a lack of data to validate the techniques used. During a disaster, collecting information about floods is challenging and can be dangerous. To overcome this issue, the team looked at the location and timing of dike breaks during Typhoon Hagibis. Dike breaks are a good indicator of which areas flooded during the typhoon and allowed the researchers to test the ability of the forecasting system to predict flood locations.

"The system was very effective," explains Kei Yoshimura, senior author. "In fact, we found that the model accurately predicted flooding at 91% of broken dike locations." Importantly, the system also predicted floods with a 32-hour lead time - a notable improvement on the current system. This extra time could be helpful for disaster preparation and making decisions about evacuation.

As the frequency of flooding is likely to increase in the future, forecasting systems that produce accurate and timely flood warnings are urgently needed in Japan, and the rest of the world.