With the COVID-19 pandemic having entered its second year, researchers across the globe are racing to develop technologies to stop further spread of the potentially deadly virus. Professor Beomjoon Kim of the Institute of Industrial Science, the University of Tokyo (UTokyo-IIS) is no exception: He is applying his research on microneedles to easy-to-use, safe, rapid and cheaper approaches to antigen/antibody testing and vaccine delivery. 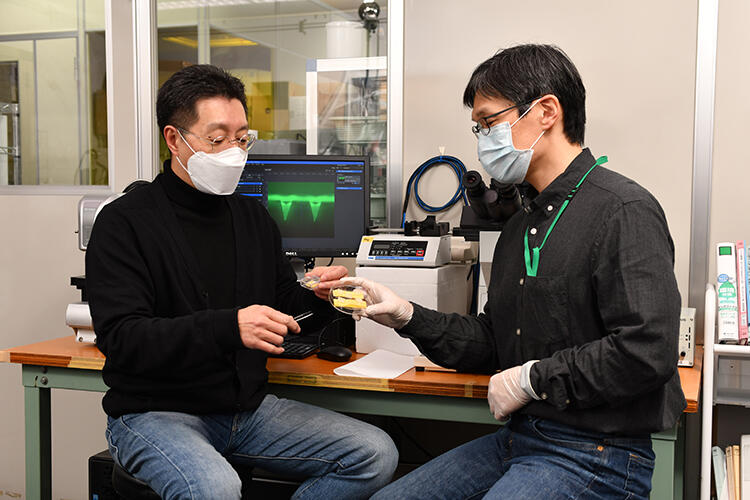 Professor Beomjoon Kim of UTokyo-IIS's Center for Interdisciplinary Research on Micro-Nano Methods became captivated by the microworld after enrolling at the institute for a master's degree upon graduation from Seoul National University in 1993. "In those days, Japan was a manufacturing superpower and had started to follow in the footstep of the United States on research into Micro-Electro-Mechanical Systems," Kim said, referring to miniaturized devices with tiny sensors, actuators and microelectronics on silicon wafers. "I initially intended to stay at UTokyo-IIS only for my master's degree, but my research was so exciting that I carried on for a doctorate instead of going to the United States, which was norm for South Korean students."

After researching about tiny sensors at France's National Center for Scientific Research (CNRS) and Twente University in the Netherlands, Kim returned to UTokyo-IIS in 2000 as an associate professor. Since then, his dedication to the tiny world has culminated in the development of microneedles, including porous microneedles for diabetes diagnostics that can penetrate human skin painlessly and extract interstitial fluid, a biofluid between blood vessels and cells. The extraction is done by capillary action, or the movement of fluid within the spaces of a porous material due to the forces of adhesion, cohesion and surface tension. The microneedles are biodegradable, making them safe to use even if they break inside the body.

As COVID-19 swept the globe during 2020, Kim wondered if his invention could help the battle against the raging pandemic. "Luckily for me, UTokyo-IIS researchers are developing a diagnostic sensor for COVID-19 antigens/antibodies as well as a vaccine," he said, referring to Project Professors Chieko Kai and Misako Yoneda. These researchers are conducting mouse experiments involving the antigen/antibody testing kit for COVID-19. The results of these experiments are expected to be announced soon.

"It might take a few years before we can use microneedles to deliver the vaccine being developed at UTokyo-IIS because vaccine development requires testing on humans," Kim said. "But once its development is complete, this will be a revolutionary delivery method because the vaccine does not need to be kept at freezing temperatures: the vaccine will be freeze-dried for storage. A person can then simply apply a microneedle patch to their skin, without the help of medical professionals."

How can porous microneedles be useful?

"When a mosquito bites you, it doesn't hurt but the area becomes itchy later," Kim said. "This is because the tip of the mosquito's sharp, straw-like mouth that pierces the skin is about 60 micrometers in diameter. Even the tiniest metal injection needle available for insulin injections is 180 micrometers in diameter, which can be painful for patients."

Kim's team developed microneedles less than 50 micrometers in diameter at the tip and 0.8 millimeters long, enough to reach the epidermis, where interstitial fluid can be found. The team focused on interstitial fluid as a biomarker because 95 percent of its constituents are the same as the blood plasma normally used for such a purpose.

Competition to make innovative microneedles has intensified in recent years, but Kim's microneedles still stand out. His diabetic diagnostics kit was the first to have porous needles using biodegradable polymers on a paper substrate, by which biofluid in the epidermis is extracted and delivered to the sensor on the paper's reverse side through a tiny channel to precisely gauge the glucose level. The sensor's color changes depending on the glucose concentration, and getting a result takes only a few minutes.

While 90 percent of Kim's competitors use metal molds to cure polymers to make microneedles, his microneedles can be made with a 3D printer, allowing the formation of any shape desired. Intensive research has already addressed microneedle strength and structure problems. Microneedles for diabetic diagnostics kits must be strong enough to penetrate into the epidermis, and holes in the needle adjusted properly to extract the biofluid.

This mechanism can directly be applied to COVID-19 testing and vaccine delivery. The sensor under development uses fluorescent molecules so antigens and antibodies ¬- which are sometimes difficult to detect because of their low concentration - can be detected about 10 times more accurately. Antibody tests, unlike PCR testing, are not suitable for determining if a person is infected with SARS-CoV-2 (the virus triggering COVID-19) because people take days or weeks to develop antibodies. But these tests could play a key role in determining the overall prevalence of COVID-19 in general populations, which is an epidemiologically significant task. After clearing a few technical hurdles, the tests will likely go on the market.

Using microneedles for vaccinations has much wider implications. "We can deliver not only vaccines for COVID-19 but also other vaccines when our research is successfully completed. It is painless, easy for lay people to use, and can be stored without freezing, so they are very affordable," Kim said. UTokyo-IIS is currently conducting joint research with medical institutions and private firms to put microneedles to practical use, which is expected to take a few years. "We will be able to deliver vaccines to children in Africa very easily, which would be a huge contribution to society," Kim said. 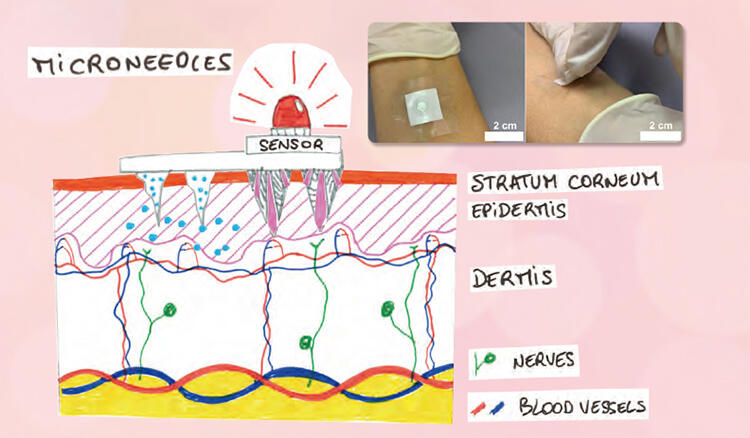 Ultimate goal is to use microneedles for preventive medicine

Going forward, Kim plans to continue researching microneedles for preventive medicine. "It's said that one-third of the world's population is prediabetic," Kim said. "Of them, 80 percent are unaware they are prediabetic. People could use a microneedle patch at home and at any time so they can regularly monitor their glucose levels." Kim is conducting research on a microneedle patch capable of simultaneously gauging levels of other heath indicators, such as cholesterol. "Medical professionals are increasingly focusing on preventive medicine," Kim said. "Microneedles will certainly be crucial for preventive treatments."

Away from his research lab, Kim wants to master several foreign languages. "When I first came here, I could not speak Japanese because studying in Japan was not my initial plan. I learned the language by watching TV," he said. "I want to learn Chinese next, and also become more fluent in Japanese when I retire because the grammar still sometimes trips me up. Learning a foreign language is vital as that opens the door to learning about a country's history and culture."

Kim Laboratory
Painless and Biodegradable Microneedles on a Patch