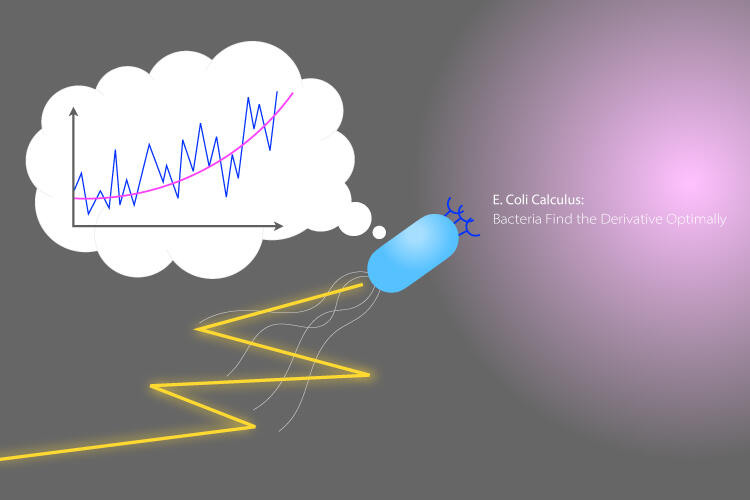 Scientists from the Graduate School of Information Science and Technology at The University of Tokyo calculated the efficiency of the sensory network that bacteria use to move towards food and found it to be optimal from an information theory standpoint. This work may lead to a better understanding of bacterial behavior and their sensory networks.

Despite being single-celled organisms, bacteria such as E. Coli can perform some impressive feats of sensing and adaptation in constantly changing environmental conditions. For example, these bacteria can sense the presence of a chemical gradient indicating the direction of food and move towards it. This process is called chemotaxis, and has been shown to be remarkably efficient, both for its high sensitivity to tiny changes in concentration and for its ability to adapt to background levels. However, the question of whether this is the best possible sensing system that can exist in noisy environments, or a suboptimal evolutionary compromise, has not been determined.

Now, researchers from The University of Tokyo have shown that the standard model biologists use to describe bacterial chemotaxis is, in fact, mathematically equivalent to the optimal dynamics. In this framework, receptors on the surface of the bacterium can be modulated by the presence of the target molecules, but this signaling network can be affected by random noise. Once the bacteria determine if they are swimming towards or away from the food, they can adjust their swimming behavior accordingly.

"E. coli can either move in a straight line or randomly reorient via tumbling. By reducing the frequency of tumbling when it senses a positive attractant concentration gradient, the bacterium can preferentially move toward the food," first author Kento Nakamura says.

Using nonlinear filtering theory, which is a branch of information theory that deals with updating information based on a stream of real-time information, the scientists showed that the system used by bacteria is indeed optimal.

The findings of this research may also be applied to sensory systems in other organisms, such as G protein-coupled receptors used for vision. Since all living systems need to be able to sense and react to their environments, this project can help evaluate the efficiency of information filtering more generally.

The work is published in Physical Review Letters as "Connection between the bacterial chemotactic network and optimal filtering." (DOI: 10.1103/PhysRevLett.126.128102).