In a new climate modeling study, researchers from the Institute of Industrial Science, The University of Tokyo have revealed major implications for global drought and aridity when limiting warming to 1.5°C rather than 2°C above pre-industrial levels. Drought has serious negative impacts on both human society and the natural world and is generally projected to increase under global climate change. As a result, assessment of the risk of drought under climate change is a critical area of climate research.

In the 2015 Paris Agreements, the United Nations Framework Convention on Climate Change (UNFCCC) proposed that the increase in global average temperature should be limited to between 1.5°C and 2°C above pre-industrial levels to limit the effects of severe climate change. However, there have been few studies focusing on the relative importance of this 0.5°C of global average temperature rise and what effect it might have on drought and aridity around the world.

"We wanted to contribute to the understanding of how important that 0.5°C could be, but it such a study is not easy to conduct based on previous modeling approaches," explains corresponding author Hyungjun Kim. "This is mainly because most models look at the extreme high levels and you cannot simply take a slice out of the data while the model spins up to this maximum. Therefore, we used data from the specially designed Half a degree Additional warming Prognosis and Projected Impacts (HAPPI) project to assess the impacts on aridity based on estimations of the balance between water and energy at the Earth's surface."

The study revealed that 2°C of warming led to more frequent dry years and more severe aridification in most areas of the world compared with 1.5°C, which emphasizes that efforts should be made to limit warming to 1.5°C above pre-industrial levels.

"There is a really strong message that some parts of the world could have more frequent drought at 2°C than at 1.5°C. This situation could be especially severe in the Mediterranean, western Europe, northern South America, the Sahel region, and southern Africa," says lead author Akira Takeshima. "However, this situation is highly regional. In some parts of the world, like Australia and some of Asia, the opposite situation was simulated, with a wetter climate at 2°C than at 1.5°C."

These findings show the importance of considering the regional impacts of the additional 0.5°C of warming, especially with respect to any future relaxation of the 1.5°C target.

The article, "Global aridity changes due to differences in surface energy and water balance between 1.5ºC and 2ºC warming" was published in Environmental Research Letters at DOI: 10.1088/1748-9326/ab9db3 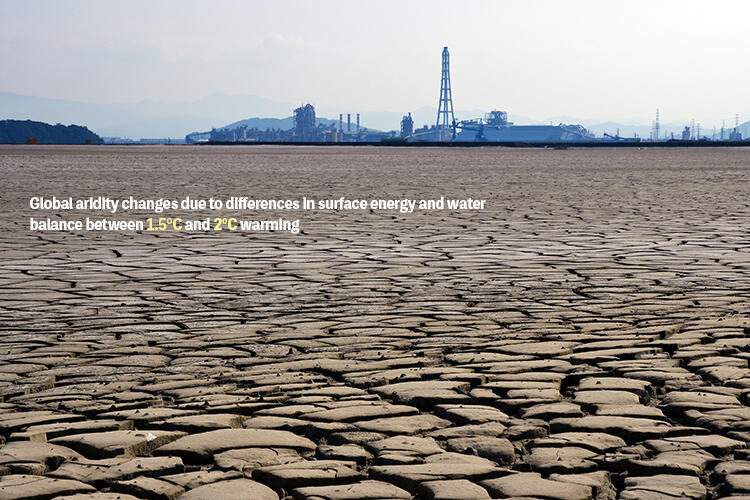