News
News
2020.02.12
Press Release
But what about flow? The effect of hydrodynamics on liquid–liquid transitions

For a long time the liquid state of pure substances was believed to be a continuous state in which the component atoms or molecules are all equivalent. However, it has now been widely shown that there can be multiple different phases within liquids, even those containing only one component. Understanding what causes the components of liquids to switch from one state to another is currently a subject of particular interest. Researchers from The University of Tokyo Institute of Industrial Science have expanded the understanding of liquid behavior by describing the role of hydrodynamics in these transitions. Their findings are published in the Proceedings of the National Academy of Sciences of the United states of America (PNAS).

Significant advances have been made in the experimental study of liquid-liquid transitions (LLT) between different liquid phases in the same system, by focusing on particular cases where the kinetics are slow, leading to easy measurement. However, gaining a theoretical understanding of what is happening in LLT on a microscopic level remains challenging owing to the complexity of the many-body systems.

An intrinsic factor in liquid behavior is hydrodynamics--the flow of liquids in motion; however, its role in LLT is yet to be considered owing to the modeling challenges involved. Now, the researchers have devised a model based on two factors that describe the ordering of the liquid; the density, and the local organization of the liquid atoms or molecules at a particular point.

"Our Ginzburg-Landau-type model evaluates the system using two order parameters; one that is conserved--density; and one that is not-- local structural order," study lead author Kyohei Takae explains. "What we found was that the growth of the liquid domain we studied was affected by density changes that cause hydrodynamic fluctuations."

It was shown that when the density changes as a result of the phase transition, hydrodynamic flow is induced leading to changes in both the rate of domain growth and the long-range interaction between the domains. Hydrodynamic interaction was therefore found to be critical to LLT and the pattern evolution and kinetics.

"Gaining a thorough understanding of liquids on a microscopic level is critical to our fundamental knowledge, and we hope it will also help with optimizing industrial processes," study author Hajime Tanaka explains. "By revealing the role of hydrodynamics in LLT we expect to precipitate future investigations into dynamically perturbed systems, such as those under externally applied flow."

Kyohei Takae and Hajime Tanaka. "Role of hydrodynamics in liquid-liquid transition of a single-component substance," Proceedings of the National Academy of Sciences of the United states of America (PNAS).
DOI: 10.1073/pnas.1911544117 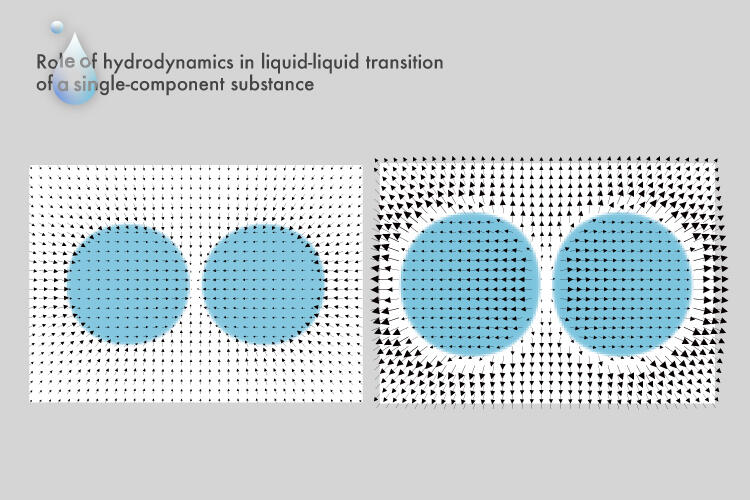