Researchers at The University of Tokyo have used computational methods and analysis of recent experimental data to demonstrate that water molecules take two distinct structures in the liquid state. The team investigated the scattering of X-ray photons through water samples and showed a bimodal distribution hidden under the first diffraction peak that resulted from tetrahedral and non-tetrahedral arrangements of water molecules. This work may have important implications throughout science, but especially with regard to living systems, like proteins and cell structures, which are strongly affected by their surrounding water molecules.

Given the ubiquity of water on our planet and the central role it plays in all known life, it may be hard to believe that there is anything left to learn about this most familiar fluid. A simple molecule made up of just two hydrogen atoms and one oxygen; water still hides fundamental mysteries that remain to be unraveled. For example, water has unusually high melting and boiling points, and even expands when it freezes (unlike most liquids, which contract). These and other unusual properties make it very different from almost all other liquids, but also allow life as we know it to exist.

Now, scientists at The University of Tokyo have combined computer simulations and the analysis of scattering experimental data to find the "structure factor" of water - the mathematical function that represents the paths of dispersed X-rays when they scatter off the hydrogen and oxygen atoms. The analysis showed two overlapping peaks hiding in the first diffraction peak of the structure factor. One of these peaks corresponded to the distance between oxygen atoms as in ordinary liquids, while the other indicated a longer distance, as in a tetrahedral arrangement. "The combination of new computational methods and analysis of recent X-ray scattering data allowed us to see what was not visible in previous work," first author of the study Rui Shi explains.

This discovery may have huge implications across many scientific fields. Knowing the exact structural ordering of water is critical for a complete understanding of molecular biology, chemistry, and even many industrial applications. "It is very satisfying to be able to unravel the liquid structure of such a fundamental substance," senior author Hajime Tanaka says.

Rui Shi and Hajime Tanaka, "Direct Evidence in the Scattering Function for the Coexistence of Two Types of Local Structures in Liquid Water,"Journal of the American Chemical Society.
DOI: 10.1021/jacs.9b11211 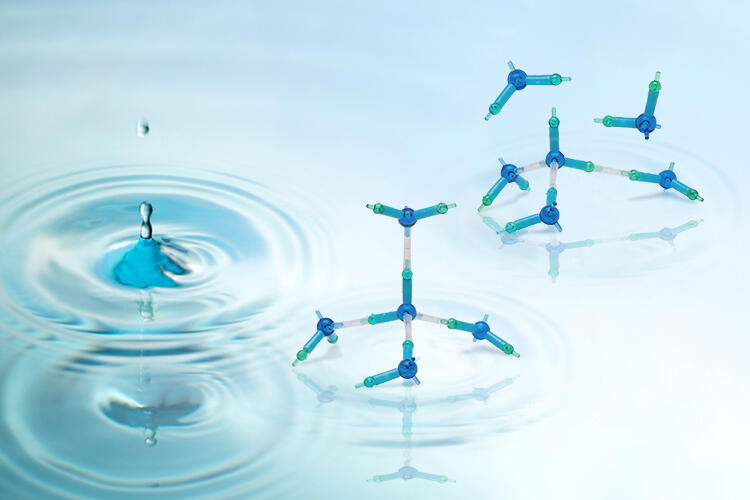