Tokyo - Flooding accounts for a third of the average annual economic losses caused by natural disasters worldwide. Flood damage resulting from typhoons and torrential rainfall is increasing each year; thus, flood prediction is a valuable strategy for disaster reduction. Predicting floods is the key component of an effective early warning system, giving governments, businesses, and individuals precious time to evacuate and protect their assets.

A team of researchers led by Institute of Industrial Science, the University of Tokyo (UTokyo-IIS) and the Japan Aerospace Exploration Agency (JAXA) have developed a powerful new system for accurately forecasting flood events. Today's Earth Japan (TE-Japan) was designed to monitor weather and river water conditions and predict future flood events. The flood monitoring data for Japan are freely available and updated on a near-real-time basis, creating a valuable resource for both research and business use.

"TE-Japan is a complete simulation system based on satellite observations of precipitation and solar radiation, surface meteorological and river data, and two state-of-the art models," explains Kei Yoshimura of UTokyo-IIS. "The land surface model, MATSIRO5, simulates the water and energy movements between land surface, vegetation, and atmosphere. The runoff output is then fed into the second model, CaMa-Flood, which can then calculate the potential for flood in a given floodplain. This then allows us to visualize the severity of the possible flood and appropriate alerts can be made."

The TE-Japan forecasting system was validated using data collected in October 2019, when Typhoon Hagibis tore through central to Northern Japan, causing widespread flooding of rivers across the region. The typhoon caused around 140 rivers to burst their banks in several places and more than seven million people in affected regions were urged to leave their homes.

"The TE-Japan system was used to predict the risk of flooding of some rivers up to two days ahead for research purposes," says Riko Oki of JAXA. "The system was able to predict well for the flood events that occurred on the Chikuma River, Ara River, and upper Tone River. However, it should be noted that this typhoon had a slower movement speed than expected, so the TE-Japan prediction was quite early."

The results of this validation work are certainly promising for early warning. "Of the 57 levees that broke during Hagibis, TE-Japan successfully alerted for 54 of them with a sufficient lead time of just under 33 hours on average," says Yoshimura. "This is a considerable improvement on the currently available flood forecasting system."

Near-real-time data distribution of the TE-Japan system is publicly available. The TE system is available at https://www.eorc.jaxa.jp/water/ or by searching for "today's earth". 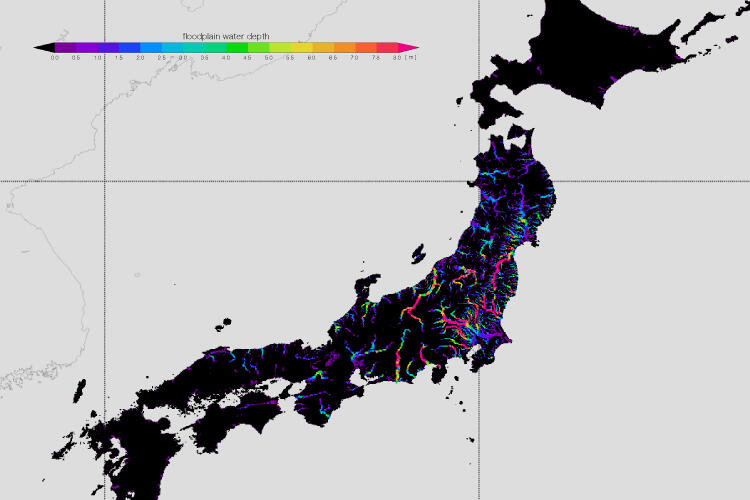