Radiation from many parts of the electromagnetic spectrum has been harnessed for extremely beneficial uses, in fields as diverse as medicine, imaging and photography, and astronomy. However, the terahertz (THz) region of the spectrum, situated between microwaves and infrared light, has been relatively underutilized owing to difficulties in generating such radiation artificially and in building devices to detect it.

In a breakthrough in the field of terahertz detection, researchers at The University of Tokyo and colleagues have created a thermomechanical device that can sense radiation in the terahertz region of the spectrum in a sensitive and rapid manner, without the need for intense cooling to cryogenic temperatures such as −270ºC. This device potentially opens up a range of new applications for THz technologies, such as THz cameras.

In this study, reported in the Journal of Applied Physics, the team made use of the heat generated by THz radiation in order to detect it. Specifically, they created a device featuring a tiny beam suspended across a gap, which they then coated with a resistive metal film [nickel-chromium (NiCr) in this case]. This metal film has the ability to absorb THz radiation, which in turn transfers heat to the beam as a whole. This increase in temperature causes the beam to expand very slightly, which can be detected as a change in the frequency at which the beam resonantly vibrates.

This new approach has a range of advantages over existing alternatives for the detection of THz radiation. The fact that it can function at room temperature without the need for cooling makes it suitable for a range of real-world applications. It is also extremely sensitive, detecting radiation that causes changes in temperature as small as one-millionth of a degree.

"Another advantage of this system is that it can be produced using standard methods for fabricating semiconductor devices, which would potentially allow its incorporation into mass-produced THz-based sensors and cameras," according to lead author Ya Zhang. "We hope that our work will lead to an explosion of interest and further innovation in this field." 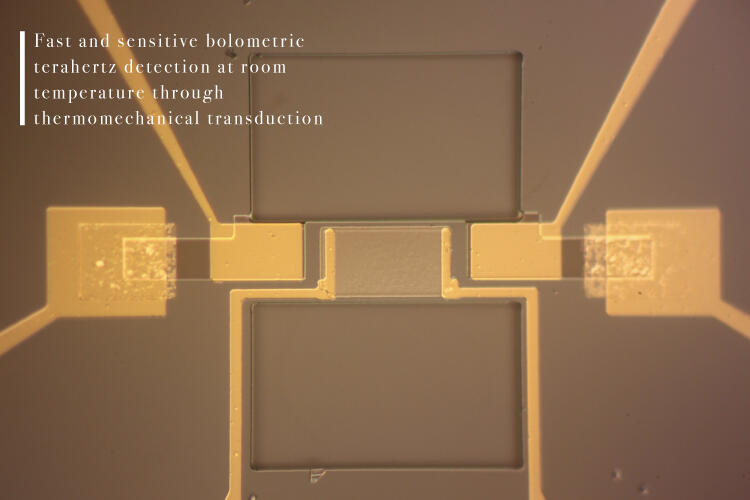