Glass is a familiar concept for most: a dependable substance known and used for thousands of years. However, there is more to glass than meets the eye. Glass is actually an amorphous material with arguably as much in common with a liquid as with the solid most would consider it to be. Glass contains atoms locked into place in a random arrangement and to those more familiar with considering the atomic level, "a glass" is the term for any substance in a state that fits this description, leading to a surprisingly broad scope.

The tendency for materials to show glassy behavior is known as "glass-forming ability" and given the undeniable success of the familiar silicon-based material, it is easy to understand why some researchers take acquiring a better understanding of such behavior seriously.

A trio of researchers centered at the Institute of Industrial Science at The University of Tokyo recently investigated glass-forming behavior by simulating two model systems whose glass-forming ability could be tuned by a single external parameter. Their wide-reaching findings were published in Physical Review X.

"Glass-forming ability is often influenced by competing effects that suppress the local order that would lead to crystal formation," study corresponding author Hajime Tanaka says. "Our findings show that this behavior is governed by a single parameter that we called the 'thermodynamic interface penalty'."

When a material is a mixture of different components, the competition between the different systems trying to behave in their natural way during cooling can lead to formation of a glass. By looking at two general systems, the team were able to decouple some of the contributing factors in this process to gain a fundamental understanding of what is occurring.

"Our work may provide a general physical principle for controlling glass-forming behavior," lead author John Russo says. "The findings could extend to understanding glassy behavior in a variety of systems with competing ordering. This could include structural, magnetic, electronic, charge, or dipolar ordering, which would clearly translate to a very broad range of potential applications down the line."

The possibility of using the fundamental findings to control the synthesis and processing of materials such as metallic alloys and phase-change materials, paves the way for physics-driven design in numerous areas of materials science. 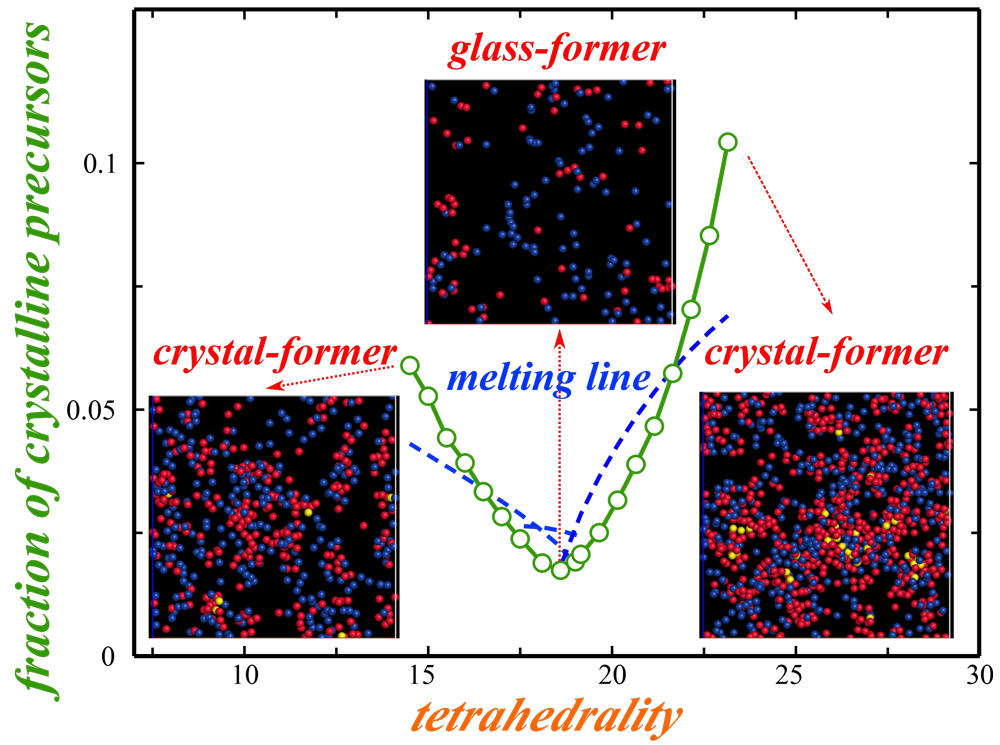 An increase in the glass-forming ability is signaled by a depression of the melting temperature towards its minimum at triple points.