Chirality is at the heart of chemical research and much technology. For organic chemists, choosing between the left- and right-handed isomers of molecules is all part of a day's work. However, many solid materials also have enantiomeric forms, giving rise to a range of applications.

Previously, this strategy has been hampered in practice. Now, researchers at The University of Tokyo's Institute of Industrial Science have successfully created chiral nanostructures from particles of gold (Au). The trick was to use circularly polarized light to generate electric fields, which localize differently depending on LCP or RCP. This in turn drove the chiral deposition of a dielectric material.

As study co-author Koichiro Saito explains, "Under a beam of circularly polarized light, electric fields built up around the cuboids - but at one pair of corners for LCP rotation, and the opposite pair under RCP light. At this point, we had achieved chirality, but in electric rather than material form."

The chirality of the electric field was then transferred to the material itself by plasmon-induced charge separation, in which Pb2+ ions were oxidized through the chirally distributed electric fields. This deposited PbO2, a dielectric material, at either one set of cuboid corners or the other, depending on the original light source. Electron microscopy showed the gold bars transformed into non-superimposable mirror images, the hallmark of chirality.

"This is the first time a chiral material has been made by exploiting plasmon resonance," co-author Tetsu Tatsuma says. "No other source of chirality is needed but light itself. Nanoscale chiral plasmonic materials are highly useful for sensing and asymmetric synthesis, and our process makes them much more efficient to produce. Plus, we don't think it's limited to one product - other chiral nanomaterials have an incredible range of functions in modern technology." 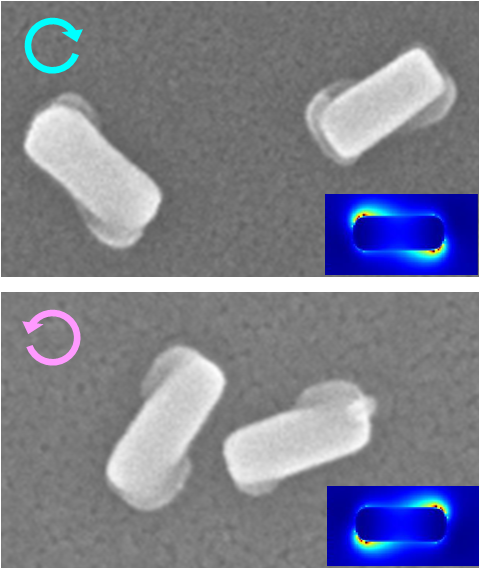 These are nanostructures prepared by RCP and LCP light irradiation.