Fracture mechanics researchers around the world are competing to unravel how cracks propagate in materials such as metals and ceramics to help the industrial sector design more robust and functional materials. Professor Yoshitaka Umeno of UTokyo-IIS is taking a unique approach to examine mechanical behaviors of materials such as deformations and cracks at nano and micro levels - phenomena which are difficult to grasp even with the use of state-of-the-art microscopes - through modeling and simulation. 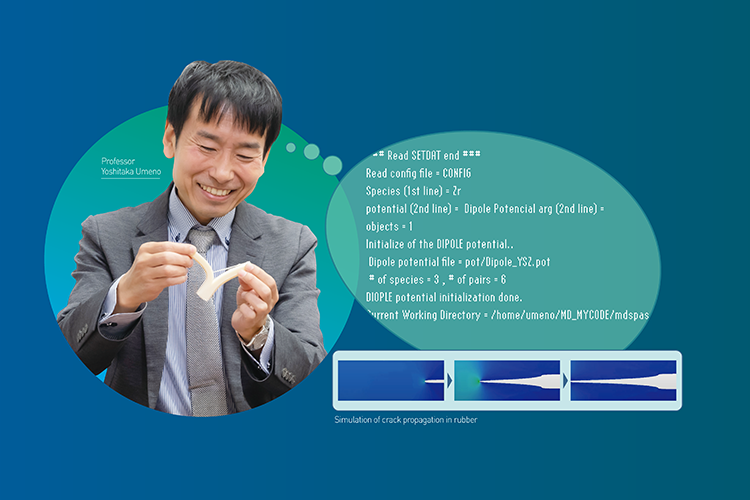 Simulation of crack propagation in rubber

Professor Yoshitaka Umeno became interested in science as a boy, influenced by his engineer father, who bought him a personal computer at the dawn of the computer age. So, it was natural for him to pursue engineering a quarter-century ago at Kyoto University with the aim of becoming involved in the manufacturing sector.

A professor at the university's graduate school who was exploring fractures at the atomic level prodded Umeno to set out on a journey to an uncharted tiny world by using computer simulations. This journey's initial stage, however, was marked by difficulties - such as Umeno being mocked.

He recalls being ridiculed by some of his peers, who told him using simulations to observe such a tiny world was no use in fracture mechanics - a typical reaction by people when they encounter a groundbreaking idea. But Umeno's research is now getting attention amid rapid advances in nanoscience and nanotechnology over the last few decades as he explores the mystery-shrouded nano- and microworld. Umeno, who now belongs to UTokyo-IIS's Center for Research on Innovative Simulation Software, joined the university as an associate professor in 2006.

"Dramatic improvements in computer performance made it possible to conduct simulations using simplified mathematical models to identify how a string of atoms ruptures and causes a material to fracture," Umeno said. "It can be done much more easily than with actual experiments requiring flawless tiny test pieces on which a load is applied repeatedly." With simulations, conditions can be changed to pinpoint a certain mechanism, Umeno added.

For example, in 2021, a team comprising Umeno and other Japanese scientists succeeded in identifying for the first time in the world the origin of a phenomenon known as velocity jump, which occurs when rubber materials under stress rapidly break. The mechanism of velocity jump has been a mystery for years despite its importance in designing durable rubber materials.

"It was challenging for me to conduct simulations on rubber, which is a soft material (materials that are easily deformed by thermal fluctuations and external forces)," Umeno said, explaining that he had focused his research on hard matter such as metals and ceramics. "It proved that my approach in using simulations is effective in examining soft matter as well." He plans to continue conducting researching into soft matter such as biodegradable plastics.

Generating an idea for a simplified mathematical model

Umeno's job is to write computer programs from scratch for the simplified mathematical models that are used for conducting simulations. "What I am doing is very rudimentary -- like craftwork done by primary schoolchildren as a summer vacation assignment," he said with a smile. "But it has to be simple to pinpoint any forces that are at play."

Deciding which mathematical formulas should be used in modeling is often a daunting challenge. Umeno says that ideas often come to him while he is driving, skiing, playing the piano or doing something other than his job.

He is responsible for many attention-getting research results. For example, Umeno used atomic model simulations, or a molecular dynamics study, to examine hard but brittle silicon, a material that is used for semiconductors. He found phenomena such as cleavage (a tendency of crystalline materials to split along a definite crystallographic structural plane) and slips (sliding displacement along a plane of one part of crystal relative to the rest of crystal).

A 2019 study by his lab offered new insights into reactions occurring in solid-oxide fuel cells (an electrochemical conversion device that produces electricity directly from oxidizing a fuel) with atomic-scale models. This could pave the way for improving their performance and durability.

Furthermore, in April 2021, Umeno's lab adopted a new research topic: "Nano-Micro Mechanophysics," which involves multiscale modeling and simulation to pursue the essence of material strength and properties, such as electrical conductivity and magnetism.

Umeno made it clear, however, that his job is to unravel mysteries involving how materials behave at the atomic level, not to think about industrial applications. "If we understand mechanisms, researchers in the private sector can use the knowhow to improve their products, a task where they excel," he said. "My mission is simply to conduct basic research to understand hitherto unknown mechanisms of how materials behave."

Umeno is now focusing on developing a new multiscale simulation method to elucidate fatigue mechanisms at nano- and micrometer scales of materials. Fatigue is a phenomenon that occurs when materials are subject to repeated stresses or loading, which could lead to crack initiation and propagation and ultimately fracture.

"The old example of metal fatigue causing an accident is the doomed Japan Airlines jet that crashed in 1985," he said. "Fatigue accounts for 90 percent of problems in industrial products, but we don't know how cracks begin at the nano- and microscale level."

This project is being pursued under the initiative of a JST-CREST program for the "nanomechanics" research area. Utilizing machine learning, the new method combines deductive (bottom-up) and inductive (top-down) multiscale approaches, which enable performing multiscale simulations that overcome the drawbacks of both conventional schemes.

"My ultimate goal is to make a multiscale simulation in a real sense from the nanometer scale to the visible scale because conventional multiscale simulation does not offer a coherent picture of how each scale is linked to the others," Umeno said. "That's the ultimate goal for any researcher in material science, I believe, but it will take a long time to achieve it."

Asked what he finds most rewarding, Umeno said it is when one of his programs is shown to be workable. He is now conducting simulations where it is difficult to learn about mechanical behaviors of materials with actual experiments. His ultimate aim is to revolutionize the process by reversing it, or by first conducting simulations to establish a hypothesis and verifying it through experiments.