The continuing progress in miniaturization of silicon microelectronic and photonic devices is causing cooling of the device structures to become increasingly challenging. Conventional heat transport in bulk materials is dominated by acoustic phonons, which are quasiparticles that represent the material's lattice vibrations, similar to the way that photons represent light waves. Unfortunately, this type of cooling is reaching its limits in these tiny structures.

However, surface effects become dominant as the materials in nanostructured devices become thinner, which means that surface waves may provide the thermal transport solution required. Surface phonon-polaritons (SPhPs) - hybrid waves composed of surface electromagnetic waves and optical phonons that propagate along the surfaces of dielectric membranes - have shown particular promise, and a team led by researchers from the Institute of Industrial Science, the University of Tokyo has now demonstrated and verified the thermal conductivity enhancements provided by these waves.

"We generated SPhPs on silicon nitride membranes with various thicknesses and measured the thermal conductivities of these membranes over wide temperature ranges," says lead author of the study Yunhui Wu. "This allowed us to establish the specific contributions of the SPhPs to the improved thermal conductivity observed in the thinner membranes."

The team observed that the thermal conductivity of membranes with thicknesses of 50 nm or less actually doubled when the temperature increased from 300 K to 800 K (approximately 27°C to 527°C). In contrast, the conductivity of a 200-nm-thick membrane decreased over the same temperature range because the acoustic phonons still dominated at that thickness.

"Measurements showed that the dielectric function of silicon nitride did not change greatly over the experimental temperature range, which meant that the observed thermal enhancements could be attributed to the action of the SPhPs," explains the Institute of Industrial Science's Masahiro Nomura, senior author of the study. "The SPhP propagation length along the membrane interface increases when the membrane thickness decreases, which allows SPhPs to conduct much more thermal energy than acoustic phonons when using these very thin membranes."

The new cooling channel provided by the SPhPs can thus compensate for the reduced phonon thermal conductivity that occurs in nanostructured materials. SPhPs are thus expected to find applications in thermal management of silicon-based microelectronic and photonic devices.

The article, "Enhanced thermal conduction by surface phonon-polaritons," was published in Science Advances at DOI: 10.1126/sciadv.abb4461. 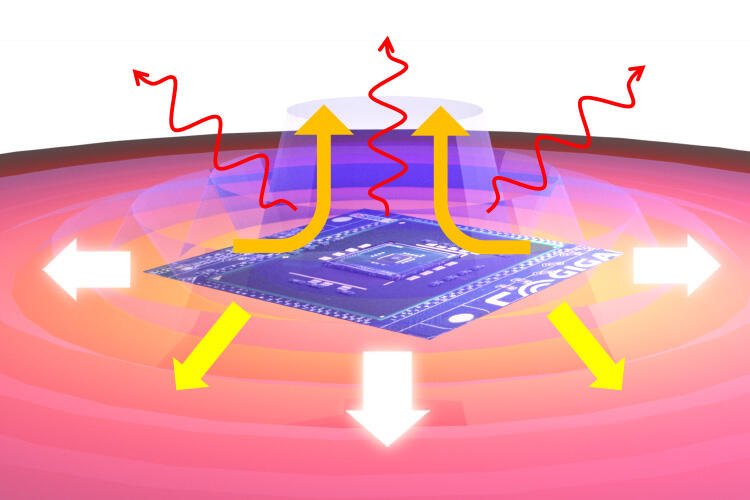