Japan has been in the forefront of research and development concerning the use of hydrogen energy for vehicles since the government committed itself about 20 years ago to creating a "hydrogen society." Professor Nobuhiro Yoshikawa of the Institute of Industrial Science, the University of Tokyo (UTokyo-IIS), is conducting research aimed at developing hydrogen-powered fuel cell vehicles (FCVs), which are seen as ideal eco-friendly cars because they do not emit carbon dioxide. His approach is to help develop light, low-cost fuel tanks that can hold high-pressure hydrogen. Such fuel tanks are a key component in fuel cell cars, the widespread adoption of which is essential if Japan wants to attain carbon neutrality by 2050. 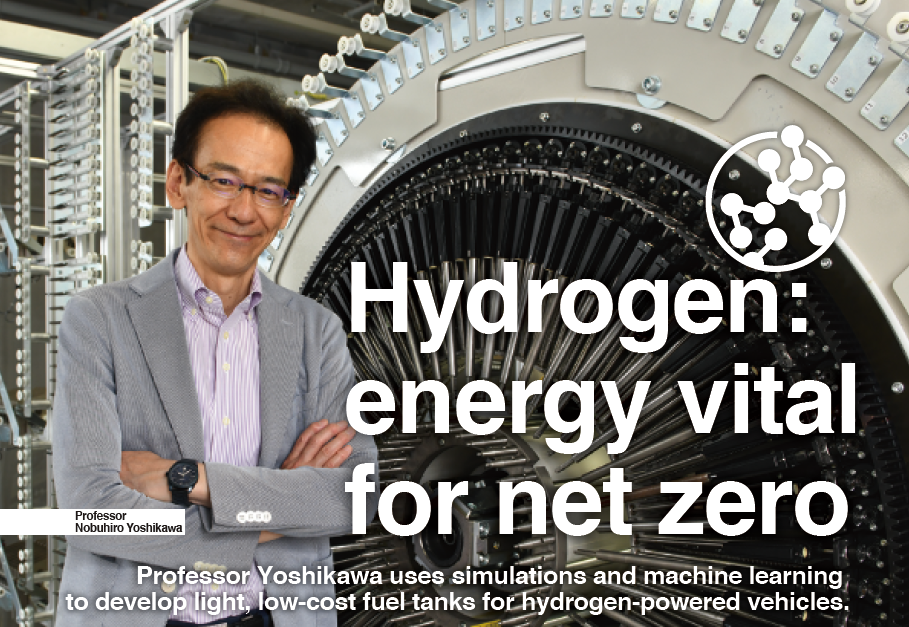 Professor Nobuhiro Yoshikawa began conducting research aimed at developing fuel tanks to hold compressed natural gas around 1990 when he was a UTokyo research associate. It wasn't his idea -- the project was suggested by one of his superiors. The opportunity to switch his research target to FCV fuel tanks came unexpectedly in the early 2010s, when the Japanese government decided to develop hydrogen energy in an effort to boost the country's stagnant economy.

"Toyota Motor decided to develop an FCV that required a high-pressure hydrogen fuel tank, but at that time, there was almost nobody but me who was conducting research on fuel tanks in Japan," Yoshikawa says. "So, the carmaker asked me to help with its development. When I began conducting researching into natural gas fuel tanks, I never imagined that my research would become useful in this way."

North America and Europe, however, are ahead of Japan when it comes to making fuel tanks because of their long and deep experience in making them for vehicles that run on natural gas, according to Yoshikawa.

Yoshikawa's lab claims to be the only entity that is capable of accurately predicting how and when a hydrogen fuel tank will break by conducting thorough simulations. His lab honed its precision in making mathematical models for this purpose thanks to its involvement in a project to use the K computer (once the world's fastest computer) in research that can be utilized in manufacturing.

FCVs have many advantages as eco-friendly cars. For example, an FCV hydrogen fuel tank can be refilled in a matter of a few minutes, whereas it takes around 30 minutes to recharge a Battery Electric Vehicle (EV hereinafter). Also, the fuel tank is suitable for large vehicles, such as long-haul trucks, because it is much lighter than the battery for large vehicles.

Despite these advantages, there has been only limited penetration of FCVs in Japan's auto market. As the end of March 2020, the number of FCVs owned by individuals and entities stood at just 5,170, compared with 123,706 for EVs, according to the Next Generation Vehicle Promotion Center. Its data also shows that Japan had 161 hydrogen stations as of March 2022, while there were 21,198 EV recharging stations.

Along with the high price of hydrogen, hindering the spread of FCVs is the use of carbon fiber reinforced plastics (CFRP) in making hydrogen fuel tanks that can withstand a pressure of 70MPa -- about 700 times standard atmospheric pressure. The large amount of CFRP required makes FCVs heavy and expensive.

Yoshikawa is now involved in a project sponsored by the New Energy and Industrial Technology Development Organization (NEDO) to make an innovative hydrogen storage system for fuel cell vehicles that reduces the use of CFRP.

His lab is trying to develop a high-pressure hydrogen fuel tank that consists of a resin container with a cylindrical body with two dome-like ends (one end has a metal boss and the other a metal valve). Strips of CFRP are wrapped around the tank to boost its strength, as well as glass fiber reinforced plastics (GFRP) to prevent scratches. Both the strong and weak parts of the tank are evenly bound with CFRP in the reinforcement process, meaning the strong parts are excessively reinforced to ensure the weak parts are sufficiently durable.

"The lighter the vehicle, the better the gas mileage," Yoshikawa says. "We are trying to
minimize the overall use of CFRP as much as possible by using simulations to accurately predict how and when the weakest parts of a tank break." The idea is to drastically change the way to ensure the safety of a fuel tank by establishing a system to detect signs of imminent failure. That would allow the use of the weakest fuel tank possible, which will be monitored around the clock by a sensor that is connected to the internet and replaced as necessary. 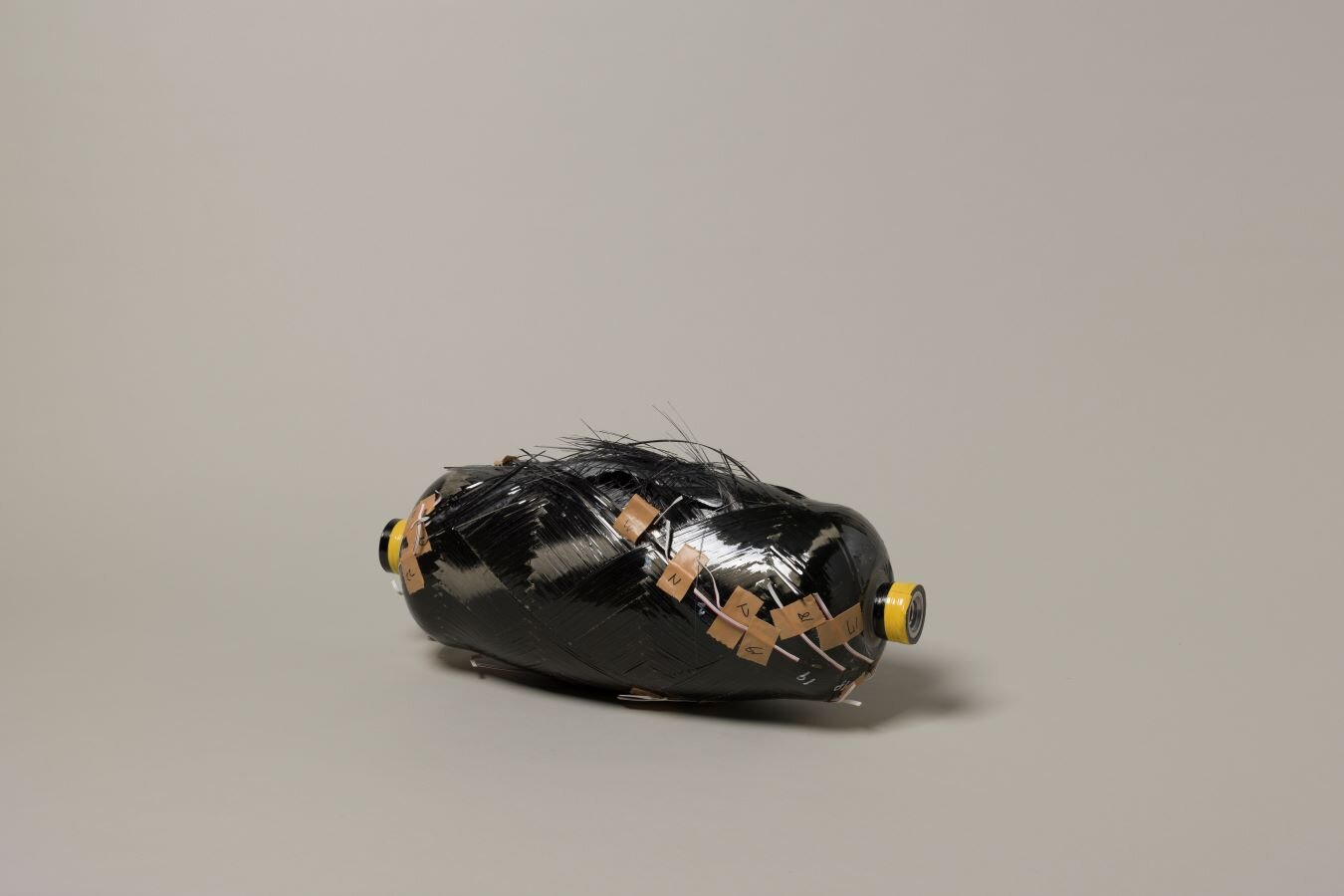 Evaluation of hydrogen tanks' strength
It involves repeated analysis through simulations, designing tanks, and experiments in which actual tanks are ruptured.
Photo by Gottingham

Yoshikawa's lab is improving the accuracy of its analysis through simulations of how fuel tanks break at the mesoscale level.

The tank is bound by a bundle of several thousand carbon fibers that are consolidated with flexible and soft resin and hardened by high heat. It is therefore necessary to understand how the resin will slowly break before the carbon fibers snap. Yoshikawa says this is a complicated process that is difficult to predict.

His lab is developing a simulation system called FrontCOMP that can make an accurate evaluation of the strength of CFRP and the ability of the tank to withstand pressure before bursting, based on a mesoscale model that combines strength models of both carbon fibers and resin.

Yoshikawa says the simulator can evaluate the impact on the strength of a fuel tank of common faults that emerge while it is being made, such as gaps created on its surface when binding it with CFRP or heating. That's another step toward designing and manufacturing an optimal fuel tank.

Applying machine learning with the help of his former student

Yoshikawa uses machine learning in his research in collaboration with SUPWAT Inc., a startup launched by one of his former students at UTokyo's Graduate School of Engineering. "We use machine learning to pinpoint how much and where we can reduce CFRP," he says, "because there are a vast number of patterns in wrapping CFRP around a resin container, for example -- a fact that is difficult for humans to handle.

"In the future, we'd like to make the software, including the simulator and the machine learning system, available with fees to any manufacturer that wishes to use it for making a tank in order to advance our research into hydrogen fuel tanks," Yoshikawa says. SUPWAT is also participating in the NEDO project.

Regarding his future aspirations, Yoshikawa said he wants to survive at least 28 more years to see whether Japan has achieved carbon neutrality in 2050. "If FCVs have spread by then, we will have much more clean air and less noise generated by vehicles," he says.