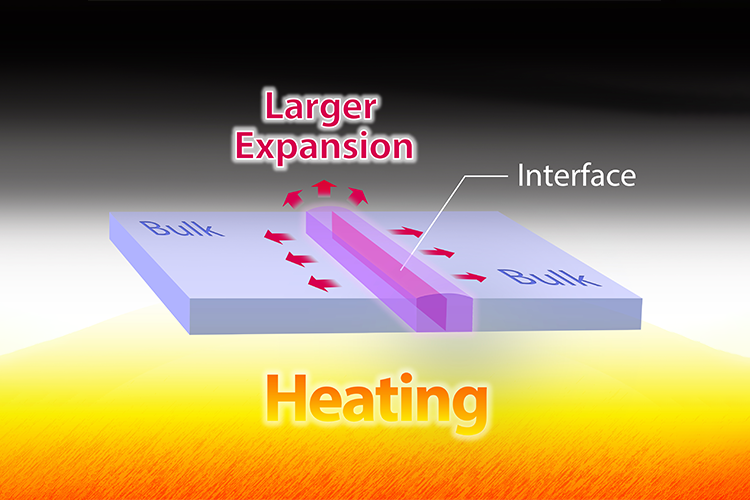 Polycrystals are solid materials that are made up of lots of small crystals. The points where the crystals meet are known as grain boundaries (GBs). GBs are important because they can affect the way the solid behaves. However, conventional analysis techniques are unable to measure the nanoscale detail at GBs. Now, researchers from The University of Tokyo Institute of Industrial Science have used electron energy loss spectroscopy (EELS) to investigate the effect of heating on the GBs of strontium titanate (SrTiO3). Their findings are published in Nano Letters.

GBs affect the way ions move through a material, the way it conducts and reacts to heat, and the way it responds when forces are applied. They therefore play an import role in deciding whether a material is suited to a particular purpose.

The coefficient of thermal expansion (CTE) indicates how the size of a material changes when it is heated. If this is different around the GBs compared with in the bulk of a material, then cracks can form. This can lead to large scale failures, which can have serious implications for the structure or process the material has been used in.

The techniques conventionally used to investigate local thermal expansion do not have the nanoscale resolution required to directly measure expansion around the GBs. The researchers therefore used EELS with scanning electron microscopy to enhance the resolution.

"We looked at the thermal expansion around two different GBs in SrTiO3--one where the grains met at an angle of 36.8° (which has the particular name Σ5) and another where they met at 45°," explains study first author Kunyen Liao. "Specifically, we investigated how the CTE changed perpendicular to these GBs when the temperature was increased over the range 100-700°C."

It was found that the CTE perpendicular to the Σ5 GB was 3 times that of the expansion in the bulk, while that perpendicular to the 45° GB was only 1.4 times greater. The findings provide directly measured evidence that GBs enhance the CTE, which has important implications for choosing application specific materials.

"In addition to revealing the variation in thermodynamic properties at different GBs in SrTiO3, our findings demonstrate the potential of EELS for providing nanoscale detail of local properties," says study corresponding author Teruyasu Mizoguchi. "We hope that our study will provide a means of establishing the local thermal properties of a range of different materials and aid the selection process for many products from automotive parts to electronics."