It takes a lot of connections to create human intelligence. Brain function depends on contacts between multiple regions within the brain. To study how this connectivity is possible - and how it can go awry - international researchers led by The University of Tokyo have grown a working model of a cerebral tract in the lab.

The cortex is divided into areas of neurons with distinct roles, such as creating or processing speech, movement, vision, etc. These cortical areas communicate through the cerebral tracts, formed by bundles (fascicles) of thin and long extensions of nerve cells named axons. The Tokyo study, led by the university's Institute of Industrial Science (IIS), invented a method to create nerve tissue mimicking cerebral tract. This could help answering questions about how long connections within the brain are formed, and ultimately, how the tracts integrate separate cognitive tasks into a unified intelligence.

Under the leadership of Yoshiho Ikeuchi, the team grew spheroids of neurons, mimicking the cerebral cortex, using induced pluripotent stem cells (iPSCs) of human. When two spheroids were placed at two ends of a microdevice that provided physical instructions, they began to extend axons toward each other along a narrow channel separating them.

"After 25 days, both tendrils of axons reached all the way down the channel, and the two cortical spheroids were connected," says Ikeuchi. "We know this was a functional electrical connection, because if one spheroid was electrically stimulated, the other would respond after a short delay. This resembles the situation in a real brain, where distant regions communicate during cognition."

Brain development is complex, and in fact the "cerebral tracts" only grew in the right circumstances. When one end of the microdevice was empty, axons still emerged from the neurons at the other end, but significantly less efficiently. Placing an object such as a glass bead at the empty end did nothing to improve fascicle growth.

"The spheroids promoting each other to grow fascicles is very interesting," says Takaaki Kirihara, first author of the study in iScience. "It implies that opposing axons mutually guide each other, connecting two groups of neurons. This could help explain how reciprocal connections are formed between distant regions of the brain, sometimes even between different hemispheres."

Although axons growing in a microdevice are by no means the same as a living brain, there is a clue that the tissue culture model was realistic. The gene L1CAM is known to be essential for cerebral tract formation. When L1CAM was knocked-down (suppressed) in the spheroids, many of the axons failed to assemble into a bundle. This suggests the model could be used to study not only normal brain tissue, but also developmental disorders of the cerebral tract.

In future, the group proposes to transcend the current setup by building a culture device that expands as the cortical spheroids grow--just as the skull gets bigger through childhood. For now, though, the results show that stem cells can be used to create realistic models of neurons, axons, and their coordinated growth. This opens the possibility of major insights into how the young brain is wired up. 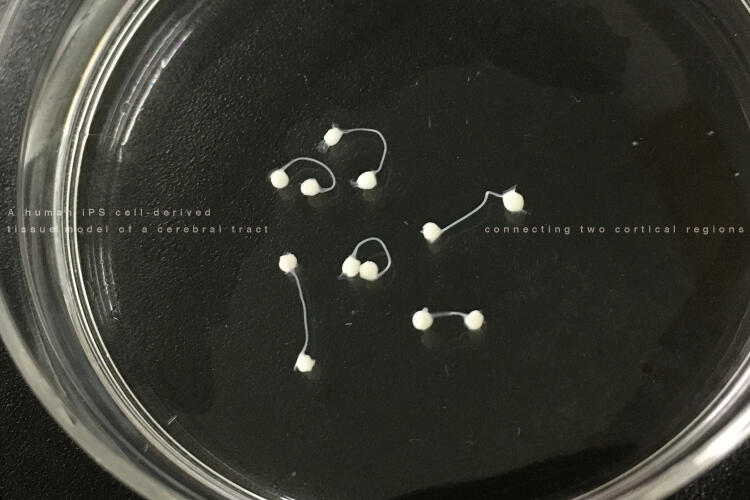